Shares
A robot has managed to solve the Rubik's Cube in 0.637 seconds. The previous record was 0.89 seconds. 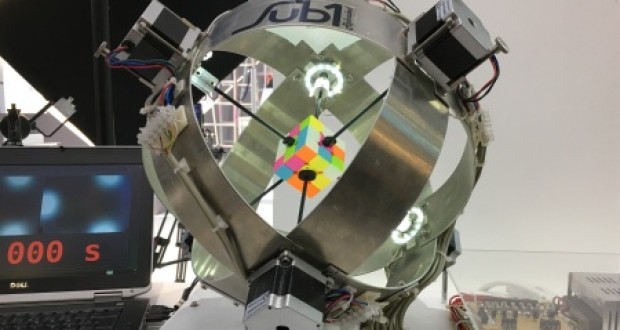 It takes an enormous amount of computing power to solve such a complex puzzle, according to Infineon, the chip producer, Joinfo.com reports with reference to RTL Nieuws.

The aim was to demonstrate how quickly computers can make complicated decisions. That kind of techniques may be used in self-propelled vehicles and possibly save lives, according to the chip maker.

“The Sub 1 Reloaded” robot was so fast that it was hardly comprehensible to the human eye. Therefore, in the video below is played in slow motion. The cube was placed in the initial position according to the special requirements of the World Cube Association.

Some people are really quick in solving the puzzle. Last Sunday the 20-year-old Dutchman Mats Valk broke the world record in solving a Rubik’s Cube by a human. He did it in 4.74 seconds.

He performed the record in Indonesia at Jawa Timur Open 2016, the largest Rubik’s Cube tournament in Java. It is not the first time that the Mats Rubik’s record breaking. In 2013 he solved the Rubik’s Cube in 5.55 seconds. Last year, he lost to the then 14-year-old Lucas Etter, who solved the puzzle in 4.90 seconds.

By Edition EN Mats said he did not expect that he would break Etter’s record. “It took a while before I realized how fast it was.”