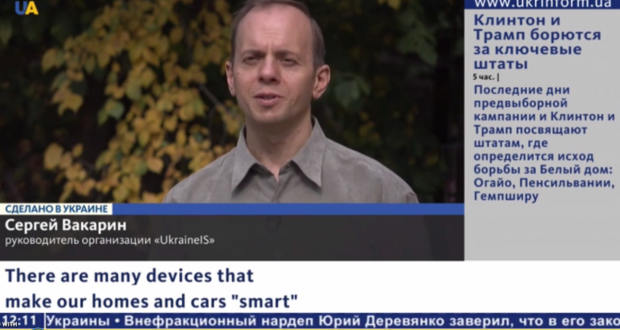 After conducting a breakthrough UAtronica-Industry 4.0 conference on Ukraine’s hi-tech future and winning the Media Hack Weekend 2016, UkraineIS started receiving calls from a number of TV outlets. First major report on our work has been shown internationally on UA|TV channel with English subtitles on November 6 at 2.35pm GMT/UTC (9.35am EST) and on November 5 at 10.10am GMT/UTC (5.10am EST).  Who will take care of the house, such as watering our plants, while we are traveling? This challenge is addressed by SmartKvitka – a startup presented by UkraineIs to the world on UA|TV. Earlier, Ukrainian scientific TV outlet Intellect TV broadcast a film about UAtronica-Industry 4.0. Why was this conference so important?

UAtronica-Industry 4.0 conference and exhibition (Kyiv – New York – Ontario – Cape Canaveral Spaceport) outlined the main directions of technological development in Ukraine. For the first time world-renowned experts in IT, aerospace industry, digital media and television, energy and biotechnology, electronics and education participated in a joint discussion, including Georges Leclere, founder of the International Emmy Awards and Igor Novikov, Ambassador of the Singularity University (founded by Google, NASA and other prominent companies), representatives of diplomatic missions of the United States, Canada and the UK. The conference and exhibition showcased many new technologies: virtual reality, biofuels projects for aviation, television and the Internet, UAVs, electric cars, 3D printers, electronics and many others. UkraineIs presented its startups at the conference, in particular SmartKvitka and virtual reality technologies of the 2Bytes startup. Later, UkraineIS and 2Bytes won the MHW 2016 hackathon – the largest in Eastern Europe – with VR Connectproject based on the technologies that make the world interactive in any place at any time. UAtronica-Industry 4.0 was the first discussion of Ukraine’s realistic path to the 21st century. USA, Canada and major European countries are in transition to the Internet of things and Industry 4.0. But currently it is very difficult for startups in Ukraine to find investors and they often have to leave for other countries. Ukraine needs a boost in public-private partnership, crowdfunding, and more co-workings and hubs for creative collaboration. Prominent international experts provided their advice to Ukrainian startups. Igor Novikov described major future challenges and opportunities for universal welfare. Ukraine with its IT potential has excellent prospects for the future. Famous international television and aerospace startups were presented at UAtronica-Industry 4.0.  Georges Leclere spoke via a video link from New York. What does the future hold for TV? Viewers no longer want to watch TV passively, and advertising revenues are plummeting. What will replace the current broadcasting system? The answer is interactive television of the future with mutual penetration of television and digital media. Andrii Muzychenko joined the discussion of aerospace technology via a video link from Florida to tell about the MarsHopper project and a spacecraft launch that the MarsHopper team watched at Cape Canaveral. Conference participants also watched the OSIRIS-REx space launch – in a few years it will reach an asteroid called Bennu that may slam into the Earth (see more detail here). Industrial Revolution 4.0 is underway in the world. We have shown the path for Ukraine and started the journey. Join us!