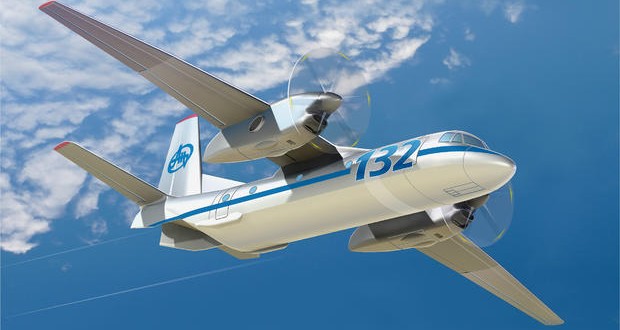 Ukrainian President Petro Poroshenko attended the ceremony and congratulated the team on this important achievement. President also wished great future and good fortune to the aircraft.

“Today is the birthday of the new AN-132D. The plane was built in a record time of 1.5 years. I am sure it has great future. I congratulate the team on this victory and wish the aircraft good fortune,” – President Poroshenko said on his Facebook page.

Ukrainian Antonov design bureau has developed a new light multipurpose transport aircraft An-132D under the contract with Taqnia Aeronautics Co. Of Saudi Arabia in cooperation with other foreign partners such as Honeywell’s US, Canadian CMC Electronics and Pratt & Whitney Canada. It took 1.5 years to create the plane.

An-132D is the first Antonov’s aircraft without Russian components. The aircraft is designed to fly at short and medium routes, it can carry out a wide range of tasks on transportation of cargoes. Its cruising speed is 500 kilometers per hour, maximum cruise altitude – 9000 meters. Its capacity is 9.2 tons, length – 24.5 meters, height – 8.8 meters, wingspan – 29.2 meters.

Antonov and Taqnia Aeronautics Co. signed a cooperation agreement on supply of 80 aircrafts. Part of the aircrafts will be manufactured in Ukraine, and Saudi Arabia will create capacity for the production of aircrafts and components in the Kingdom.