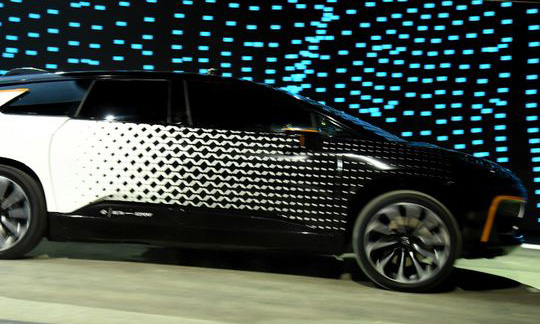 Officials said the sleek four-door would boast 1,000 horsepower produced by electric motors, and that it would begin taking $5,000 deposits on the company website.

Faraday Future, the California-based electric car company, presented its concept of an electric car at CES 2016 in Las Vegas.

In March, one FF 91 (pronounced “nine one”) will be auctioned off for charity at an undisclosed event. The main production run is slated for 2018, company executives said.

As for price, Faraday representatives said only that the company aims “to deliver the value of an ultra-luxury car at the price of a premium sedan.”

Over the past year, “we have moved from the idea of a company to a company with fully functioning beta vehicles,” said Nick Sampson, Faraday’s senior vice president of R&D and engineering. “We have to flip the automotive industry back on its head, break it down and build it up the way it should have been in the first place, independent of fossil fuels.”

The FF 91’s battery not only gives the vehicle that staggering horsepower number, but also a range of 378 miles.

To demonstrate the FF 91’s superior 0-to-60 miles per hour capability, Faraday exec Peter Savagian ushered in vehicles from Tesla, Bentley and Ferrari and let each speed past the bleachers full of media and other attendees in a giant hanger in downtown Las Vegas.

Faraday’s FF 91 set a new record of 2.39 seconds in the trial, he said. “It outruns gravity,” said Savagian, the company’s vice president of propulsion engineering.

In an apparent response to recent reports suggesting Faraday Future has hit some rough spots — an investigation by Buzzfeed cited an employee exodus, unpaid bills and plant production setbacks — Sampson finished the event by saying that “despite all the naysayers … we will carry on to make the impossible possible.”