Shares
The best comes now with a choice: Sony and Panasonic also try to sell OLED TVs. But a new LG screen is stunning 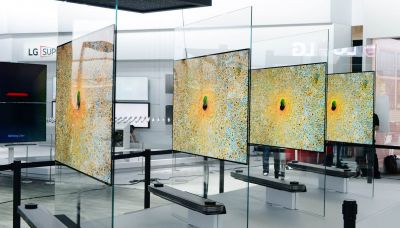 At the International Consumer Electronics Show (CES) in Las Vegas, Sony has announced that it will bring OLED TVs on the market. Panasonic has also jumped on the bandwagon. Samsung proposes what it calls QLED. But it was LG that stole the show with its new generation of TVs.

OLED stands for Organic Light Emitting Diode. OLED displays work quite differently than LCD. OLED screen is made of organic material, and each pixel individually gives light. There is no backlight in it like in LCD. That makes the screen thinner and more energy efficient. The picture quality of OLED is significantly better compared to LED or LCD. Black is really black and the contrast is higher.

To be very pragmatic, there is nothing better than OLED TV sets currently. LG has a lead in this area, the South Korean company has invested very heavily in the technology. And it is, in fact, the only company able to produce OLED screens for TV sets on the assembly line.

The new line of LG TV screens presented in Las Vegas is really jaw-dropping. It is just 2.57-millimeters thick, LG OLED TV W, wherein W stands for “wallpaper” because you can hang it on the wall with magnets like a poster.

With a flat cable, the display is fixed to a base station below the screen, which also serves as a sound system. It can also come with the Dolby Atmos soundbar.

LG did not reveal pricing but it is clear that the new screens will be very expensive. But there are less pricy models in the 2017 LG OLED lineup that allows you to enjoy almost the same quality of a picture.

Watch a video from The Verge: