Home / Tech / Shock: Man loses seven teeth and is left with second degree burns after e-cigarette explodes in his face

Shock: Man loses seven teeth and is left with second degree burns after e-cigarette explodes in his face

Shares
An Idaho father, 30, lost seven teeth and was left with second degree burns to his cheek after his e-cigarette exploded in his face. 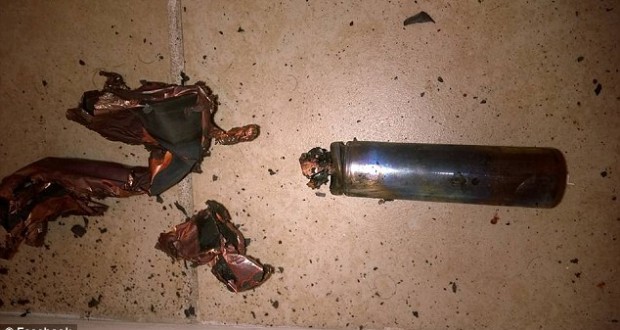 Andrew Hall was getting ready for work at home in Pocatello, Idaho, when he said an e-cigarette exploded without warning, Mail Online reports.

It shattered into pieces in his mouth, knocking out his teeth and burning his face and neck along with smoke marks to the wall of his bathroom, where he was at the time.

The 30-year-old car salesman shared photographs of his injuries from the intensive care unit of a hospital to warn other smokers how dangerous the electronic cigarettes can be.

‘Yesterday morning I was getting ready for work when I had something happen to me that I didn’t expect possible.

‘I Vape (I know, terrible and uncool) but I no longer do and I hope to possible sway those that do to maybe reevaluate or find other methods of smoking.

‘I’ve been doing this for about a year now and assure you I did not do anything I wasn’t supposed to (battery was in right, always had the shop put it together when I first bought it and add things and maintenance it the right way while taking their advice) but it exploded in my face.

‘I’ve lost at least 7 teeth, 2nd degree burns to face and neck and have been pulling chunks of plastic, teeth and foreign objects from mouth, throat and lips,’ he told Facebook friends.

Mr Hall, who has three children, shared several photographs of his injuries and of the damage to his home done by the explosion after being accused of making up the story. The photographs showed a shattered sink and black, smoke marks on the wall. It’s not clear which model Mr Hall was smoking. He claims he had it put together by staff at the vape store where he bought it.

He is not the first to suffer serious burns or facial injuries from exploding electronic cigarettes.

In December, an e-cigarette’s battery exploded in a man’s pocket right next to a baby’s pram in a shopping mall in Leeds, the UK.