Innovative Chinese cyclist says no to sitting on saddles

Shares
Li Ming’s passion for pedaling has fueled his hobbies and guided him on uncharted career paths. 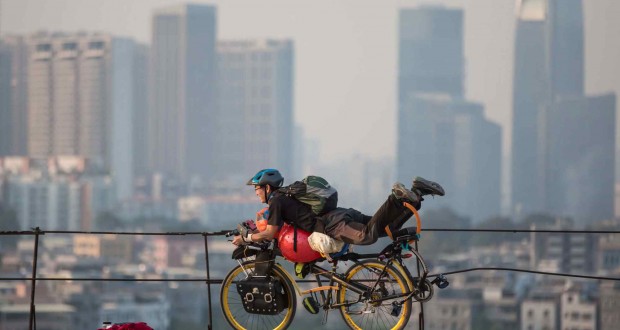 The bicycle enthusiast has introduced riding bicycles in a prone position to China and is on a mission to spread the unusual riding technique while retrofitting vehicles to suit this cycling style, CGTN News reports. Li got on a bicycle for the first time at the age of 5, and has kept pedaling ever since. While at an elementary school, Li decided to acquire an adult bike – a Raleigh – not minding any possible risks. Hopping on and getting off the 26-inch mountainous bike proved to be a challenge for the young boy, but Li kept the wheels turning, and before too long he geared up for another adventure: a 28-inch bike that took him around Shandong Province, in east China, where he used to study. Soon, however, bicycles failed to get him all fired up, so he revved his engines and braved the world of motorbikes. He spent four years on the road, traveling around China’s southern areas.

But his flame for bicycles could not be extinguished.

In 2009, he was back to steering the handlebars, this time crossing Southeast Asia. Three years on, he roamed around Tibet, where altitude sickness did not put a brake on his enthusiasm, and Li ended up in Nepal. In 2015, an accidental click on a video led Li to navigate an untrodden road, as he took on a newfound hobby: prone bicycles.

The bicycles allow cyclists to stretch their bodies horizontally, in a similar position as swimmers, enabling them to push the pedals in a fast spinning action.

Li was head over heels about this new cycling method that turned standard riding position on its head. Over the past two years, he retrofitted around seven bicycles, with each costing him around 987 yuan (144 US dollars). He also established a club where people with either curiosity or genuine interest about prone bikes could have a chance to assume the Superman-style riding position. “I think it is cool. It is more comfortable and easier to ride prone bikes than common ones. There is no pressure on the spine, even when riding for long distances,” Xiao Yun, a prone biker said. Li’s club members are his strongest backup. The fifty-something-year-old man hopes he could change people’s stances on this way of cycling and attract more to join.