Shares
Kyocera "rafre" is the first ever "washable smartphone" 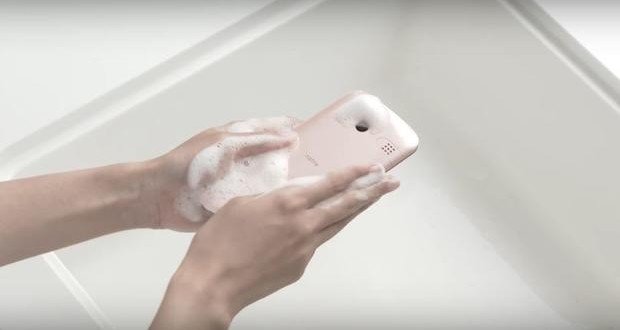 The Japanese creation is the successor to the “DIGNO rafre” which appeared in late 2015, but while the first phone was only protected against “foaming hand soap”, the latest “rafre” comes complete with body soap protection for bath-time frolics and is even taking aim at the culinary crowd, IBT reports.

“The new rafre features resistance to hot water and a touchscreen that be can be used even when the user’s hands are wet or when wearing gloves,” explained Kyocera.

“Furthermore, the new handset is equipped with a special cooking app which allows users to scroll through recipes, set timers and answer calls through hand gestures without having to touch the display. This allows use of the smartphone while users’ hands are coated with cooking ingredients.”

A, frankly quite disturbing, video launched alongside the announcement in which a bubble-bathed Pale Pink version (other colors include “Clear White” and “Light Blue”) of the device is washed over a sink. The video is embedded below, but be warned, it contains bizarrely sensual smartphone scrubbing.

On the spec front, the handset packs a 5in HD display, 16GB of internal storage, 2GB of RAM and a 3,000 mAh battery, with a 13 megapixel rear camera and a 5 megapixel selfie camera for your soapy snaps. It also comes with Android’s latest OS version (7.0 Nougat).

Much to the likely disappointment of grubby-handed smartphone buyers, Kyocera’s new handset will launch exclusively in Japan in March 2017.