Shares
MMOne – is a VR race simulator developed by a Ukraine-based startup MM-Company from Odesa, which is ready for commercial production 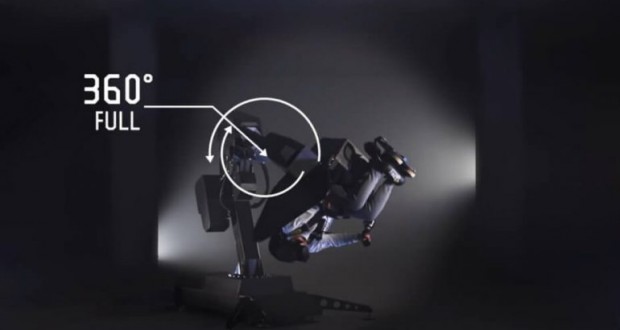 The VR chair called MMOne that revolves along three axes, is developed specifically for use with VR headsets. The developers say the commercial version of the chair is now ready for production.

“We have had many versions of this attraction, but each time the output of the commercial version stalled over the certification issue. Now we have received the European TUV certificate», – says Andrew Borysov, co-founder of the MM-company.

According to the MM company statement, “MMOne™ is a new simulator that includes a fixed platform with adjustable legs, the base (or “hand”), attached sports seats, and VR glasses or screen. The control system includes a joystick or interactive wheel.”

The project was launched in 2012 and now a startup team consists of 10 people.

Earlier this year, the team has finally completed the development of the commercial version of the chair, which was preceded by the appearance of several prototypes. The cost of last year’s prototype was an impressive $50,000. All these years, development was funded solely by the co-founders, but the company is going to involve investors for the mass production of the wonder chair.

The company wants to put this wonder chair in shopping malls and attraction parks all over the place.

According to VentureBeat, the chair is now compatible with a number of games, including the racing sim Project Cars from Slightly Mad Studios, DCS World (flight simulator) from Eagle Dynamics, Red Bull Air Race from Slight Mad Studios, and Wingracers and Trackmania Turbo from Ubisoft.

Here is the official trailer for MMOne:

In the video below you can see the prototype of the chair demonstrated at Paris Games Week exhibition in 2015: