Robot Barista Serves You Coffee And Saves Your Time 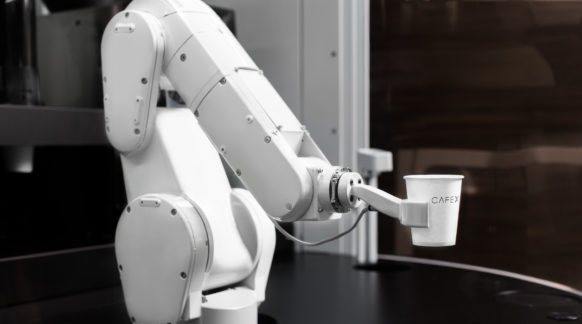 One robot barista has been serving coffee in Cafe X at the Hong Kong Science Park for a while now, but the first American kiosk opens today at the Metreon shopping center in San Francisco, after months of preparation, Joinfo.com reports with reference to Wired.

The Cafe X is not a café actually. It’s just a small, rounded kiosk, white on the bottom, with a large glass panel that lets you watch while an industrial robot pumps caramel into your latte. You order at an iPad-powered kiosk, or using Cafe X’s app. Pick your espresso drink, choose from three kinds of beans, and decide whether you want a little syrup, a lot of super, or Insane Syrup. Then pay, and press order. The robot barista then spins around, grabs a cup from the dispenser, and sticks it under the industrial-grade WMF espresso machine. One robot can make several drinks at once, and each takes about 20 seconds. Once your drink is ready, you type in a four-digit pin code, reach into the hatch, and grab your white cup printed with Cafe X’s logo.

The most of the preparation time was spent on paperwork, actually: the health department couldn’t figure out what to make of Cafe X, eventually deciding to classify it like a food truck. “We even offered to put wheels on it!” says Stephen Klein, Cafe X’s general manager, but their only eventual requirement was to add a sink, which sits in some closed-off room down the hall. Now that the government understands Cafe X, CEO Henry Hu says they can set up another robot in half an hour.

Which they intend to do as quickly as possible, Klein says, assuming they can navigate around what he describes as “the coffee mafia” in San Francisco. Peet’s owns the rights to serve coffee in many of the city’s transit centers, for instance.

But anywhere there are a lot of people, moving quickly, Cafe X wants to be there. Rather than waiting in line at Starbucks every morning, they want to offer their morning fix without any of the hassle (or human interaction).

But they’re still hoping the robot experience is fun enough that you’ll want to go back every day—that’s why Cafe X isn’t just a vending machine, and why you can watch the robot work as it makes your joe.

It’s a tricky balance: Hu even thought about adding more personality to the robot, teaching it to dance or flourish the way a cruise ship taught its robot bartenders, but decided against it. “You don’t want to see it dancing, when you’re like, ‘just make my coffee.’” Hu started working on Cafe X in 2014, and has raised $5 million in venture-capital funding. He also received a Thiel Fellowship in 2016, which gave him $100,000 to drop out of school and work on Cafe X fill-time. He knew a bit about car-building factory robots, which are incredibly precise and programmable, and thought he could use the same arms for other uses.

“Some people ask if it’s overkill,” he says, to take a robot that can build a Prius and employ it making lattes. “Maybe it is a little.” Ultimately, he thinks this tech could be applied throughout the food service industry, to other kinds of beverages and beyond. “Cafes are not just coffee,” he says with a smile.

Hu’s robot-server idea is coming into view at the right time, as political and technological debate rages over automation and the future of work. “The jobs that are going away are primarily going away because of automation,” Barack Obama said recently. “And that’s going to accelerate.” Hu mostly wants to talk about coffee, but is clearly interested in where else his robots could work.

For now, though, it’s just coffee. Surprisingly delicious coffee, starting at $2.25—cheaper than you’d find at Sightglass or even Starbucks.

Cafe X’s location in the corner of the Metreon may not entice you out of your daily routine. But maybe someday, when you can order coffee at the bottom of the subway station escalator and pick it up at the top, with a tip of your cap to your robot barista, you’ll appreciate that first cup even more.

See also: Humanoid robots, with cultural awareness and a good bedside manner, could help solve the crisis over care for the elderly, academics say.