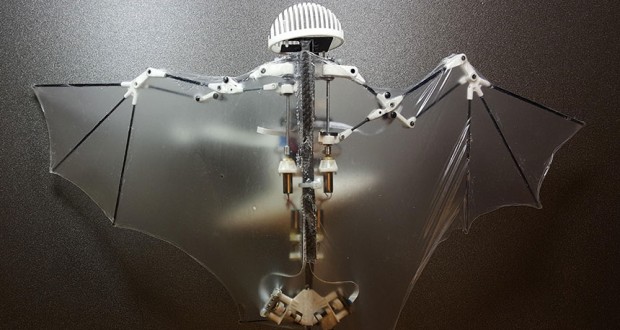 Such a maneuverable machine could one day soar up the towering structures of a construction site, flying in and out of steel beams to help keep track of a building’s progress, study coauthor Seth Hutchinson, a roboticist at the University of Illinois at Urbana-Champaign, said in a news briefing January 31.

Other aerial robots, like some drones, aren’t so agile, relying on four whirling rotor blades to lift off the ground, Hutchinson said. These bots also have trouble flying in the wind, because they can exert force in only one direction, he said. Bat Bot’s flexible wings could make it a more versatile flier.

“Bat flight is the holy grail of aerial robotics,” said study coauthor Soon-Jo Chung, a Caltech aerospace engineer. Bats have more than 40 joints in their wings, which give the animals exquisite control over their flight maneuvers. Chung and colleagues re-created nine of the key joints, so their robot could flap its wings in sync, fold each wing independently and move each of its hind legs up and down. At 93 grams, with a wingspan of 47 centimeters, Bat Bot is roughly the size of an Egyptian fruit bat, Chung said.

An onboard computer and sensors let Bat Bot adjust its movements in midair. But the bot still needs a net to land: A crash could bust its electronics. Sticking the landing is the next step, the researchers said. They want Bat Bot to be able to perch — both right-side up and upside down.