Shares
The long-held belief that nature, after millions of years of evolution, often had the best solutions to many scientific problems is being challenged by a team of researchers trying to work out the fastest and most efficient way for six-legged robots to walk. 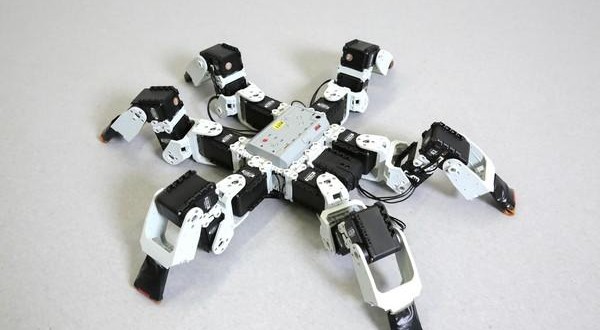 The team questioned the conventional wisdom of copying insects that walk with tripod gait, where they have three legs on the ground at all times – two on one side of their body and one on the other, Joinfo.com reports with reference to GMA News.

“We use simulations in robots like this one and try to identify new strategies that might be faster and more efficient for six-legged animals to move through the world and in fact we identified a new set of walking strategies that we call bipod gaits. In bipod gaits two legs are on the ground at once, for example the front left and rear right or the middle legs, allowing the creature and the animal or the robot, for example, to move more rapidly through the environment and to optimise the cost or the energy efficiency of the robot as it moves through the world,” said Pavan Ramdya, co-lead and corresponding author of the study.

To test the various combinations of legs, the researchers at École Polytechnique Fédérale de Lausanne and at the University of Lausanne used an evolutionary-like algorithm to sift through as many different possible gaits, using a simulated common fruit fly, eliminating the slowest gaits and short-listing the fastest.

The findings, published in Nature Communications, show the tripod gait won when the model was climbing vertical surfaces with adhesion on the tips of its legs – but not on the flat.

“Instead of the tripod gait, when you don’t have adhesion which insects use to crawl up walls or on ceilings or other three-dimensional surfaces, you actually can move more quickly using what we call a bipod gait. So a bipod gait is a dynamically stable gait that allows the robot to use two legs on the ground at once instead of three to move more quickly through the environment,” Ramdya said.

Robots are typically designed to walk along flat surfaces so the benefits of such a tripod gait are lost.

The findings beg the question why hasn’t nature realised this and the team believe they have the answer.

“Insects don’t use the bipod gait so why might this be? We saw in the simulation that adhesion might be the reason why the tripod gait is there and that’s why we asked ourselves ‘what happens if we block adhesion in the real insect?’ So we put little polymer boots on the animal which blocks the adhesion and then we saw that the tripod gait was disappearing. So we saw more of a bipod-like gait pattern,” said Robin Thandiackal, a co-lead author of the study.

The team says their work represents an important contribution to the study of animal and robotic locomotion.

“These results show how we can control robots to move more quickly and efficiently on the ground and also inform biologists for why it is that insects move the way they do through the world,” Ramdya said.