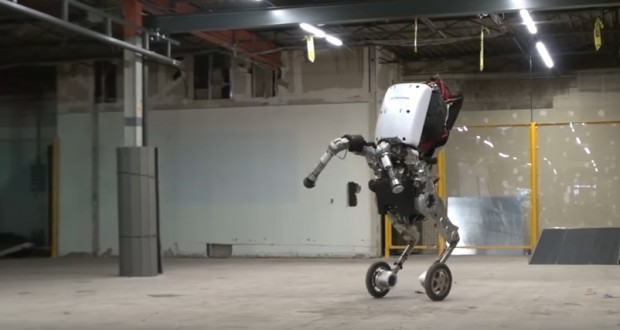 Boston Dynamics dropped a video of its newest bot, Handle, this week. It’s a biped—but with wheels instead of feet, screaming around a building and leaping four feet high and doing pirouettes, Wired reports.

Handle isn’t just a startling reminder that highly sophisticated robots are here and stealing jobs, but that humans can create robotic forms superior to anything you’ll find in nature.

What Boston Dynamics has done with Handle is take what natural selection has crafted—the human form—and turned it into a more efficient chimera. It’s created an evolutionary marvel.

Two legs are far less stable than four. That’s not so much a problem for humans with years of practice, but a serious problem if you’re trying to build a bipedal robot that doesn’t fall on its face.

Should you crack that problem, though, you have a machine that can navigate a world built for humans like a human. It can climb stairs and open doors. It could even drive a car if need be. Creating robots in our image is part egomania, sure, but it’s more about inventing machines that could one day explore places made for bipeds. For instance, taking care of your grandma in her two-story house.

Would Handle be good at that sort of thing? Probably not—just you try climbing stairs on rollerblades. (Boston Dynamics did not reply to a request for comment. About the robot, not the rollerblades.) But if Boston Dynamics’ video is any indication, its form would do nicely in a warehouse as a heavy lifter or patrolling with soldiers as a kind of pack animal. (The US military wanted the firm’s “BigDog” quadruped for such a purpose, but rejected it in 2015 because it was too noisy.) And really, no one robot will be a universal solution. Wheeled bots are great on wide open plains, tracked robots rock when traversing rubble, and bipeds rule buildings built for people.

But what about a robot that can transform itself for each environment?

“We can wear various contraptions to allow us to skate on ice, go underwater for days at a time, and even fly to the moon,” says roboticist Jerry Pratt of the Institute for Human and Machine Cognition. But we take those skates and space suits off when we return indoors.

“It would be great to see a version of the Boston Dynamics Handle robot that can roll around fast on city streets but then take off its wheels and walk inside a building.”

Boston Dynamics claims Handle can travel 15 miles on a charge. It is an academic robot for now, so don’t expect one for Christmas this year. But it represents something exhilarating: Humans are getting very, very good at taking the bipedalism that evolution gave us and not only replicating it in robots, but supercharging it to a quite honestly terrifying degree.

See also: Researchers find most efficient way to walk for this six-legged robot.