Home / Tech / 7 incredible things you can do with 5G

7 incredible things you can do with 5G

Shares
The next generation of wireless tech is more than just a boost for your phone. Think self-driving cars, telemedicine and VR reaching their true potential. 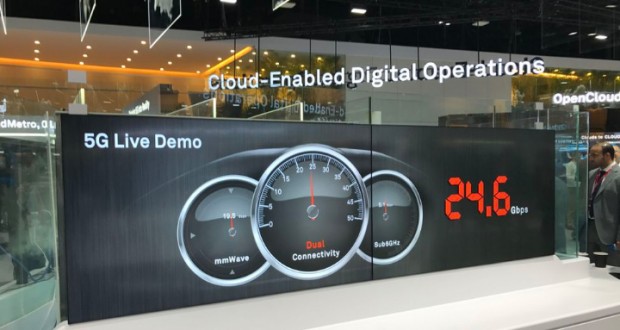 If there’s a phenomenon that’s dominated the Mobile World Congress besides the return of a 17-year-old phone, it’s the reality that the next generation of cellular technology has arrived. Well, at least it’s real in the confines of the Fira Gran Via convention center in Barcelona, Cnet reports.

Above the Qualcomm booth flashed the slogan: “5G: From the company that brought you 3G and 4G.” If you took a few more steps, you could hear an Intel representative shout about the benefits of 5G. If you hopped over to Ericsson, you’d find a “5G avenue” with multiple exhibits demonstrating the benefits of the technology. Samsung kicked off its press conference not with its new tablets, but with a chat about 5G.

The hype around 5G has been brewing for more than a year, but we’re finally starting to see the early research and development bear fruit. The technology promises to change our lives by connecting everything around us to a network that is 100 times faster than our cellular connection and 10 times faster than our speediest home broadband service.

But it’s not just about speed for speed’s sake. While the move from 3G to 4G LTE was about faster connections, the evolution to 5G is so much more. The combination of speed, responsiveness and reach could unlock the full capabilities of other hot trends in technology, offering a boost to self-driving cars, drones, virtual reality and the internet of things.

“If you just think of speed, you don’t see the magic of all it can do,” said Jefferson Wang, who follows the mobile industry for IBB Consulting.

5G is still a while away for consumers but there’s a chance it’s coming sooner than we thought.

“We are absolutely convinced that 5G is the next revolution,” Tim Baxter, president of Samsung’s US unit, said during a press conference Sunday.

Here’s just a taste of what 5G will be able to unlock.

Beyond speed, the biggest benefit of 5G is its low latency, or the short lag time between a device pinging the network and getting a response. While not necessarily noticeable, there is a lag with 4G LTE. A 5G network virtually eliminates it, meaning a surgeon may not need to be in the same room as a patient in the future.

Ericsson, working with startup NeuroDigital Technologies and doctors at King’s College London, used a dummy patient to demonstrate how a surgeon could use a VR headset and special glove to control a robot arm that would perform an actual operation in another location.

The glove was fitted with haptic feedback motors that buzzed when you touched the dummy’s organ, giving you the sensation that you were actually touching it.

Companies are calling this idea the “internet of skills” that would enable you to transfer your expertise over a great distance in real time using robotics and haptic feedback.

Without the real-time 5G connection, the whole setup would be impossible.

The surgery feedback is just one example of how touch will play into the 5G network. With haptic feedback, you’ll be able to transmit the tactile sensation of experience, enhancing the sights and sounds of a video experience.

Another Ericsson simulation put you in the driver’s seat of a car 50 kilometers away from the Fira. Thanks to the feedback system built into the chair, you could feel yourself going over speed bumps and crashing into cones — which I did at an alarming rate.

“In order to touch and feel things miles away, you need low latency,” Sprint Chief Technology Officer John Saw said in an interview Monday. That will have applications in the industrial area, including having humans overseeing robotic assembly.

It’s the first time the network will be faster than your mind, Ericsson Chief Technology Officer Ulf Ewaldson said in an interview Wednesday.

While companies like Google and Uber are investing in self-driving cars now, many in the industry don’t believe a fully autonomous vehicle is possible without a 5G network.

“We are absolutely convinced that 5G is the next revolution.”

That instantly responsive network and ubiquitous coverage means the cars will be able to use 5G to talk to other cars and sensors built around the city, from street lamps to gas stations.

“It not just about the cars,” Adam Koeppe, vice president of network planning for Verizon, said in an interview Monday. “It’s about urban design and technology.”

Similarly, 5G will unlock the true capability of drones. Lynn Comp, director of market development at Intel, cited the example of a drone flying over an oil drill with a video camera. The network will allow for precise control of the drone, while sending back high-definition video.

VR was a huge trend at last year’s Mobile World Congress. But the technology took a back seat this year with little new hardware other than an update from Samsung.

Meanwhile, virtual reality is in the hands of filmmakers, and it seems more happened at the recent Sundance Film Festival than at MWC.

If there was any VR at Mobile World Congress, much of it was part of a demonstration of how 5G could enhance the experience, allowing you to chat in real time with live-streaming virtual worlds.

Do you want to make sure you always have a dependable connection? 5G might be able to help with that. Phone companies already offer “service-level agreements” that guarantee a connection for mission-critical businesses and applications.

With 5G, the networks will be smart enough to offer those guarantees to individuals. Of course, don’t expect it to be cheap.

The most obvious application of 5G is as a replacement for traditional home internet service. And it’s coming really soon, with Verizon and AT&T already investing in trials in the US.

Of course, phones will eventually get the 5G treatment. Roger Gurnani, chief information and technology architect for Verizon, teased coming back to Barcelona next year with a 5G phone.

That may prove overly ambitious, but Gurnani and the rest of the industry know there’s a lot of work ahead and high customer expectations to fill. In the end, that’s their priority.

“It’s not about the Gs,” John Stankey, head of AT&T’s entertainment business, said in a keynote Monday. “It’s not about 5G or 5 gigs. It’s going to be about more.”