Shares
Dementia sufferers could soon benefit from a breakthrough treatment, in the form of a robot. 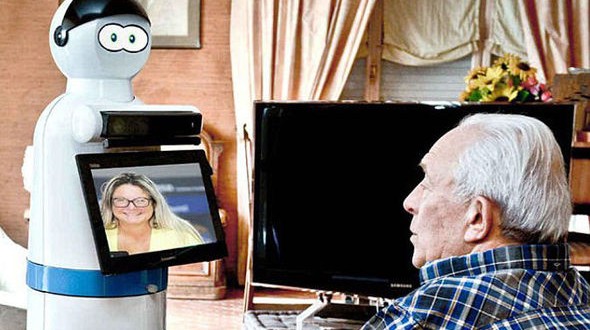 ’Mario’ can help them to find their keys and keep their mind active. The robot is designed to stave of loneliness often caused by the illness, Joinfo.com reports with reference to Express.

Patients can chat about things such as the weather and the time with the robot, as well as going through old family photos and discussing them with the robot.

Creators hope this will help dementia sufferers to remember times with their loved ones.

“Someone will be able to look at photos from Christmas ten years ago.

He said that the robot will be able to engage with elderly people in a way that mimics human interaction.

The device, which cost £15,000, is being tested currently on a number of British patients in the early stages of dementia in Stockport.

Producers of Mario, Robosoft, hope the price of the robot could fall to £5,000 if it is mass produced.

Mario has a 3D sensor that act as eyes to find items like keys, glasses and wallets.

An iPad will be mounted on the front of the machine which can be activated by voice controls, as well as touch. It can play music, TV or display photographs.

Mario has a built in basket to carry around personal items and an emergency button patients can reach if they have fallen.

However, some critics have questioned whether a robot can substitute human interaction.

Autoimmune diseases may be linked to a heightened risk of dementia, a new study has revealed.

It was also recently found that eating too much sugar could lead to Alzheimer’s disease – the most common form of dementia – experts have warned.

A diet high in sugar not only less to diabetes and obesity but now researchers have revealed it can stop a protein from working efficiently.

Experts have confirmed there are biological links between dementia and high blood sugar.

Researchers at University of Bath compared brain samples of 30 people with and without Alzheimer’s disease and tested them for protein glycation, a modification caused by high glucose levels in the blood.