Shares
This MIT robot can read your mind to learn if it's getting a simple task right or wrong, possibly setting up a foundation for thought-controlled machines. 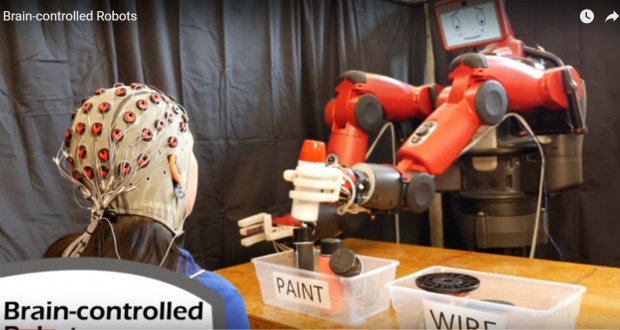 Meet Baxter, a humanoid robot that can recognize and respond to a thought we probably all have about others all the time: “You’re doing that wrong”, Joinfo.com reports with reference to Cnet.

The system out of MIT requires a human participant to wear an electroencephalography (EEG) monitor that records brain activity and can tell when that person thinks Baxter is screwing up as it sorts objects.

You can watch one such experiment below involving Baxter separating spools of wire from cans of paint.

MIT set out to design a system that could actually respond to a person’s automatic responses to a robot’s actions.

Specifically, Baxter focuses on brain signals called “error-related potentials” (ErrPs) that our minds generate whenever we notice a goof.

“As you watch the robot, all you have to do is mentally agree or disagree with what it is doing,” Daniela Rus, director of MIT’s Computer Science and Artificial Intelligence Laboratory (CSAIL), said in a release. “You don’t have to train yourself to think in a certain way — the machine adapts to you, and not the other way around.”

Baxter is actually a multi-purpose robot from Rethink Robotics designed for industrial automation that MIT researchers hooked up to their mind-reading algorithm.

Right now Baxter can only handle binary “right or wrong” activities, but the research team thinks it could also be possible to control multiple-choice tasks via thought. Eventually, the system could be a foundation for fully controlling robots in more intuitive ways.

“Imagine being able to instantaneously tell a robot to do a certain action, without needing to type a command, push a button or even say a word,” Rus said. “A streamlined approach like that would improve our abilities to supervise factory robots, driverless cars and other technologies we haven’t even invented yet.”