Shares
This is Sedric, Volkswagen’s newest concept for the future of autonomous driving. Sedric (from ‘SElf-DRIving Car) is fully autonomous, meaning it has no steering wheel or pedals, and it can be summoned at the push of a button. 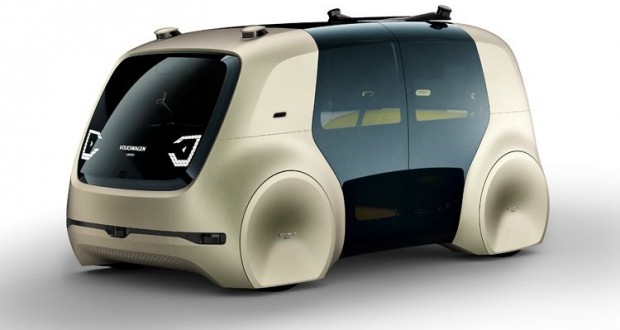 VW claims that Sedric is the first vehicle to be designed for fully autonomous driving “from scratch”, Joinfo.com reports with reference to The Verge.

Of course, it’s important to note that Sedric is just a concept for now.

Volkswagen Group AG, the parent group of VW, revealed Sedric at the Geneva Auto Show today. Here’s the video from the event.

Unfortunately, this thing looks so much like a pissed-off toaster, The Verge stresses.

Despite Sedric’s seemingly irritable countenance, VW says it will serve as a “friend and companion” for your family. This appears to be part of a growing trend among automakers to transform the family vehicle into something akin to a pet. At CES earlier this year, Toyota unveiled its Concept-i vehicle, complete with built-in artificial intelligence called “Yui.” Like Sedric, the Concept-i had something approaching a face. Both cars have the ability to “wink” thanks to digitized headlights — which is excellent news for everyone who thinks we need more cars that act like cheesy uncles.

The interior is unlike any car on the road today. It looks more like a ‘70s-era cocktail lounge than your average transit van. There are hints of other concept cars in Sedric, like the garden of succulents on the dash like Rinspeed’s Oasis and suicide doors for ease of entry like the Chrysler Portal. The yellow interior is reminiscent of VW’s other big concept this year, the I.D. Buzz microbus.

Volkswagen says Sedric can be summoned via this fancy button, which changes color and vibrates when the vehicle arrives. This is meant to guide people with impaired vision, which is one of the biggest selling points for fully autonomous cars. “The Button is the link between the user and Sedric,” the company says.

Sedric was “devised, designed, developed and constructed” by two separate think tanks within the larger VW organization, one in Potsdam and the other in Wolfsburg. Design elements and technological features in Sedric will appear in VW’s production-ready cars in the years to come. So Sedric is less a fully formed vehicle, and more of an idea board from which the company can pick and choose as it develops new cars in the future.