Shares
The man took his iPhone to a repair store in Queensland, Australia. He wanted the screen repaired and said the battery wasn't working 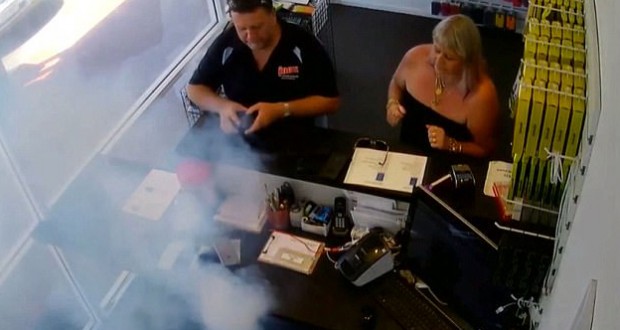 An iPhone has exploded in an owner’s hands as he took it into a shop to be repaired. On Monday, the Queensland man was getting the screen of his damaged iPhone 6+ repaired, and complained the genuine Apple battery was not holding charge, Joinfo.com reports with reference to Mail Online.

CCTV footage shows the iPhone explode in his hands, before the repairman doused it with a fire extinguisher.

The store was evacuated, and had to be closed for the rest of the day due to fumes.

Afterwards, the iPhone can be seen melted and charred. The battery had expanded and could no longer fit.

A spokesperson for the store described the explosion to ViralHog, and was reported to be in Queensland by Nine News.

‘A customer came into the store with screen damaged iPhone 6+ for repair,’ the store said.

‘The customer wanted repair of broken screen and complained of Apple genuine battery not holding charge.

‘We removed the customer’s Otterbox and prepared to book the phone in.

‘Then, the customer picked up phone and applied a regular amount of pressure to the screen, the same as any normal person would do every day during regular use.

‘The battery failed and exploded. Initial force of the explosion caused the screen to come off the phone.’