Home / Tech / Gita the robot may help you schlep the groceries

Gita the robot may help you schlep the groceries

Shares
A large, roundish follow-me robot on wheels can schlep our stuff while it navigates urban sidewalks and other tight spaces. 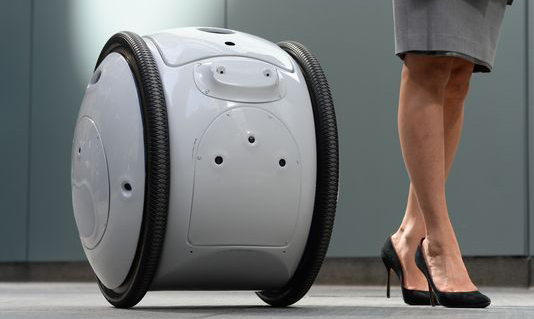 A 75-pound Gita prototype certainly made quite an impression on passersby as it rolled down New York’s busy Madison Avenue, according to USA Today.

Several people stopped to gawk at Gita and snap pictures during a demonstration, and to ask: What is it?

It’s a robot from Piaggio Fast Forward, which you can think of as a Boston start-up within the 135-year old Italian-based Piaggio Group, famous for having introduced the Vespa scooter just after World War II. Gita is Italian for “trip.”

“We come to the area of robotics from the perspective of light mobility,” says Piagio Fast Forward chief executive Jeffrey Schnapp.

Gita is designed for cargo. It has a compartment big enough to carry a case of wine, roughly 40 pounds, suggesting that a couple of years from now consumers might employ just such a robot to lug groceries. It can operate around 8 hours on a lithium ion battery, charged by plugging it into a regular outlet.

The idea is you might walk to the store or ride a bike instead of driving, and have Gita follow behind. It can follow you home, too, or you can unleash Gita on its own to deliver whatever it is you bought. Gita can capture 360-degree video and its movements can be tracked, useful if someone tried to mess with your stuff while the robot was in transit. It can also operate inside a house.

While much of the public’s fascination with futuristic delivery has centered on drones, the robotics industry has also been working on land-based autonomous vehicles that don’t face the flight regulations that have slowed the rollout of commercial drone deliveries. Starship Technologies, from the co-founders of Skype, has developed a fleet of self-driving robots that can deliver food or other stuff to your door. The company is running pilots with DoorDash in Redwood City, Calif., and Postmates in Washington, D.C.

Gita isn’t meant to be a companion or substitute for a living breathing pet. There are lights and a touch screen interface, though, and Gita is actually kind of cute. No one on Madison Avenue seemed scared as it approached, but the New Yorkers have seen pretty much everything.

“We’re not trying to make it your friend,” Schnapp says. “But it was important for us that it be an appealing vehicle and a vehicle whose behavior inspires trust.”

For all its potential consumer appeal, Piaggio plans to lease or sell the robot for commercial purposes when it first goes into production in 2018. Along those lines, you might see Gita in resort communities and hotels, shopping malls, urban authorities, parks, campuses and so on. Gita can also be used to map indoor spaces and sidewalks that are difficult to map using other methods. Piaggio is opening up the platform to developers and companies who may want to customize the robot for their own use. It hasn’t disclosed a sticker price.

It’s also developing a sibling bot that can haul about 250 pounds, freeing its operator to do other things.

Though it can work autonomously and in a convoy with other robots, Gita is meant to learn from the human operator who controls it while donning a wearable of some sort. “We think that human intelligence is a way more powerful tool to teach robots the complexities of the world than to try to have robots figure out the complexities on their own,” Schnapp says. “Having humans at the steering wheel is a good thing.”

It is operated by the person walking next to it, who wears a special belt.  Sensors on Gita can help it avoid obstacles and the robot has the smarts to plan its routes. Gita can back up, move forward and rotate on its own axis. It can also move at human speeds, from a crawl on up to 22 mph.

“Gita behaves just like you do as a pedestrian,” Schnapp says.

Along those lines, Gita complies with the Americans with Disabilities Act, so it can handle curb cuts and ramps on the street. For now, it can’t ride an elevator, climb stairs or on its own detect a red light, though that could change in the future if such lights were wired into a city network. “It’s perfectly conceivable we could design our vehicles to cross stoplights but that’s not the world we live in right now,” Schnapp says.