Tesla might have real competition soon—meet the Lucid Air

Shares
Still a couple of years from production, but the prototype is very convincing. 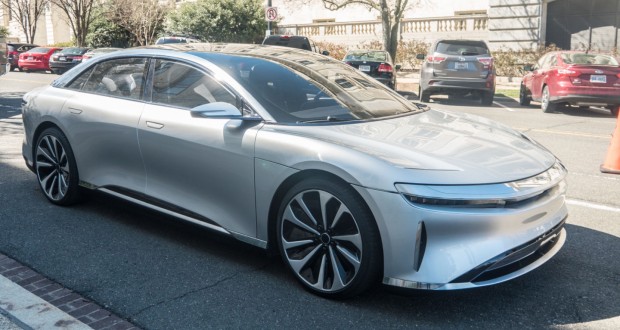 It’s still surprising that Tesla has had the high-end electric car market to itself for all these years. The Model S has existed for nearly five years, and even today, potential rivals remain in the prototype stages. Porsche is going ahead with the Mission E. Faraday Future has the FF91 under development, and then there’s Lucid. Formerly known as

Formerly known as Atieva, it’s backed by the same Chinese billionaire as Faraday Future, and this week the company brought a prototype of its first model to Washington, DC, according to Ars Technica. 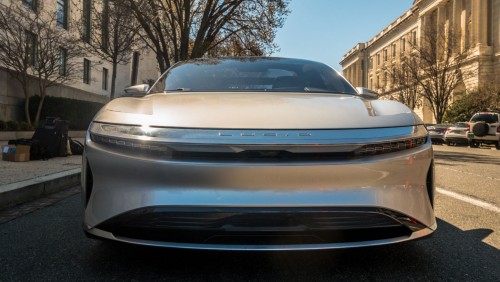 With its concept car looks and a pearlescent coat of paint, the Lucid Air certainly drew people’s attention as it sat parked outside of one of the US Senate buildings. The first thing that strikes you is the car’s relative compactness. Lucid CTO (and former Model S chief engineer) Peter Rawlinson explained that the goal was to be a similar size to the Mercedes-Benz E Class on the outside but with S Class-beating space on the inside. 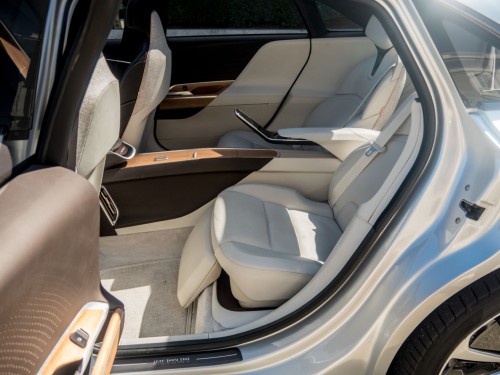 It’s a design brief that was met, in part through the sculpting and shape of the battery pack. The (optional) individually reclining rear bucket seats may steal cargo space from the rear trunk, but this feature makes up for it with the amount of room provided for passengers. Reclined fully—actually a little too much toward the horizontal if anything—there’s more leg room than you’d find in a BMW M760Li even with the front passenger seat moved completely forward.

The sense of interior space greatly benefited from the color palette—a theme called Santa Cruz, inspired by a particular spot on the Californian coast—and a panoramic glass roof that we hope makes it to the production car. The car we saw was actually an alpha prototype, VIN 1 according to Rawlinson. Despite this, it was remarkably functional for such an early stage in the development process.

Up front, all the digital screens worked. The temperature sensor on the main instrument display flickered between 6 and 6.5 degrees Celsius (42.8-43.7 degrees Fahrenheit). The menus scrolled and (barring the occasional bug) the buttons behaved as intended. Eventually, Lucid would like to use a single curved screen in place of the three individual ones that currently sit in the top half of the dash. The larger iPad-like touchscreen retracts up into the dash, exposing an extra storage cubby in the process. Tesla owners will find a small bit of familiarity; the Air uses the same Mercedes-Benz column stalks as the Model S.

Even the base version of the Air—due in 2019—sounds pretty attractive. Lucid is targeting a $60,000 price before tax credits, for which you get a rear-wheel drive electric vehicle with 400hp (298kW) and a range of 240 miles. But that version won’t be the one to make headlines. The options list will include both 100kWh and 130kWh battery packs, the latter good for 400 miles of range. By then, investment by companies like ChargePoint should mean a network of higher-kW DC Fast charging options should be in place; Rawlinson said that the car will be ready to accept these higher output chargers.

The batteries use chemistry developed in collaboration with Samsung, with a focus on being tolerant to repeated fast charging cycles. (Rawlinson told us this will be particularly important for the Chinese market, where few owners will have a garage in which to charge their EV overnight.) The company evidently knows a thing or two about batteries. In its previous guise as Atieva, it won the contract to supply Formula E’s next racecar, which will finally have the range to complete an entire race.

Step up from the base Air and you also step up in performance. To go with those larger battery packs, there’s a dual motor version—400hp (298kW) at the front and 600hp (447kW). And yes, apparently they will deliver a total of 1,000hp when on the go. However, there’s no definitive pricing information as yet for those models beyond an estimate that the tag will be north of $100,000.

Suspension will be via an inverted air suspension setup, where the air dampers are actually fixed to the car’s chassis and therefore don’t contribute to unsprung weight.

Given that it’s developing the motor, transmission, batteries, electronics, and software in-house, Lucid obviously has quite a bit of work to do in order to hit the 2019 launch date. The company also has yet to build a factory, although plans are in place to do that in Arizona. In the meantime, we have an offer to visit Lucid’s base in Silicon Valley—hopefully you’ll be able to read more about that later this year.