Samsung launches Galaxy S8 and dreams of recovery from Note 7

Shares
Samsung Electronics Co Ltd unveiled its Galaxy S8 flagship smartphone as it battles to regain the market leadership it lost to Apple Inc after the embarrassing withdrawal of the fire-prone Note 7s. 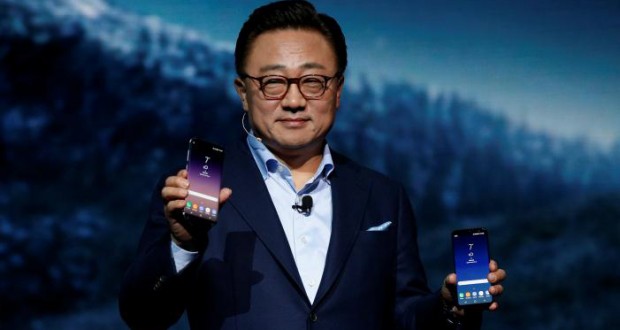 Boasting some of the largest wrap-around screens ever made, the long-awaited S8 is the South Korean technology company’s first new premium phone since its September recall of all Galaxy Note 7 smartphones equipped with fire-prone batteries, according to Reuters.

Samsung halted their sales in 10 markets, and the phones were banned from aircraft in the United States, denting a revival of the firm’s mobile business.

Two versions of the Galaxy S8, code-named Dream internally, were launched at a media event in New York on Wednesday, with 6.2-inch (15.75 cm) and 5.8-inch curved screens – the largest to date for Samsung’s premium smartphones. They will go on sale on April 21.

“We must be bold enough to step into the unknown and humble enough to learn from our mistakes,” D.J. Koh, the company’s mobile chief, said at the event after acknowledging that it had been a challenging year for Samsung.

U.S. carriers T-Mobile US Inc and Verizon Communications Inc announced retail pricing for the smaller S8 around $700. The larger phone will sell for $840 at Verizon and $850 at T-Mobile.

The S8 features Samsung’s new artificial intelligence service, Bixby, with functions including a voice-commanded assistant system similar to Apple’s Siri. There is also a new facial recognition application that lets users unlock their phones by looking at them.

Samsung is hoping the design update and the new features, focused on making life easier for consumers, will be enough to revive sales in a year Apple is expected to introduce major changes to its iPhones, including the very curved screens that have become staples of the Galaxy brand.

The S8 is also crucial for Samsung’s image as a maker of reliable mobile devices. The self-combusting Galaxy Note 7s had to be scrapped in October just two months after their launch, and the recall was particularly damaging, investors and analysts say.

“The Galaxy S8 is the most important phone for Samsung in a decade and every aspect will be under the microscope following the Note 7 recall,” said Ben Wood, a veteran smartphone industry analyst with UK-based CCS Insight.