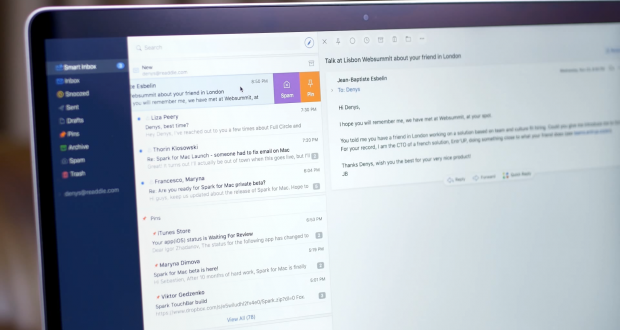 Now he’s left Apple to be VP of engineering at Readdle, the Ukrainian developer behind popular productivity apps like Scanner Pro, PDF Expert, and the email app Spark, Joinfo.com reports with reference to TechInsider.

Blanchard will be in charge of hiring more engineers to work on Spark in San Francisco, Readdle’s first remote office outside of its main headquarters in Odessa.

In an interview with Business Insider, Blanchard said he decided to leave his manager job at Apple for Readdle when “we realized we all had the same vision for how we want to see the future of email evolve.”

That future includes a mix of pro features that Spark already has, like a smart inbox that automatically surfaces your most important messages, as well as new ideas about how email should work between teams of people.

Joining a smaller company like Readdle, which has 105 employees, also comes with a heightened sense of focus on solving peoples’ biggest frustrations with email, according to Blanchard.

“Apple is a big company,” he said. “It’s not an email company. It’s a hardware and services company. And Mail is an important application on their operating systems, but it’s not their main focus.”

Readdle has a long laundry list of planned features for Spark that Blanchard will help implement, including Android support, calendar integration, and a Slack-like component for group emails that businesses will be able to pay for through a subscription.

Readdle is a rare example of an independent app developer that’s managed to consistently grow its business while never taking outside funding. The nearly 10-year-old company is profitable and has more than doubled its headcount over the past two years, according to CEO Igor Zhadanov.

Readdle’s suite of apps for managing documents, calendars, and more have collectively been downloaded over 65 million times and won multiple coveted Apple design awards. Some of its apps, such as Spark, are completely free, while others are paid downloads.

The overall app market has seen a profound change since the beginning of the App Store. Readdle’s efforts to develop Spark come at a time when most people only use a handful of apps per month. Other large companies, like Dropbox, have also tried to maintain email apps and failed.

“All of the independent developers took a hit because it’s incredibly hard to compete in the App Store, especially if you have a paid product,” Denys Zhadanov, Readdle’s VP of marketing, told Business Insider. “All these big companies, like Apple and Microsoft or Adobe, they have free versions because it’s complimentary for them. It’s hard to compete with free.”

Still, Readdle is banking on being able to monetize Spark through subscriptions for businesses. A future version of the app will replace the traditional forward button with a Slack-like chat feature designed to help teams quickly talk about a specific email. Zhadanov said that Spark isn’t looking to compete with services like Slack, but sees the subscription as complimentary to other internal chat tools.

Aside from Spark, Readdle has big updates in the works for several of its other apps, including PDF Expert. An upcoming feature will also allow for the drag and drop of files between different Readdle apps on the iPad — something that even Apple hasn’t implemented for its own apps yet.