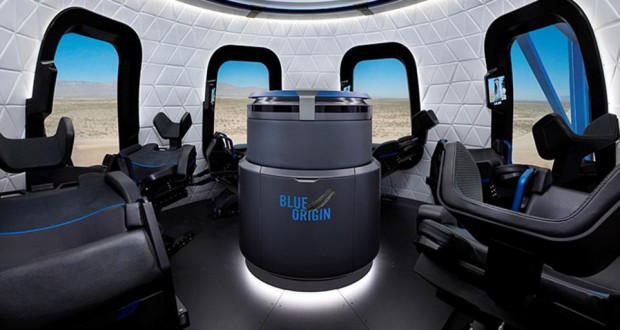 Blue Origin, the rocket company owned by Amazon’s Jeff Bezos, has revealed the first images of its reusable passenger capsule, due to take tourists to space next year, Joinfo.com reports with reference to Daily Mail.

The ‘New Shepard’ capsule’s roomy interior includes seats for six travellers, who will be treated to views from the ‘largest windows in space’.

The include reclining black seats with blue piping, and seats emblazoned with the Blue Origin feather logo. 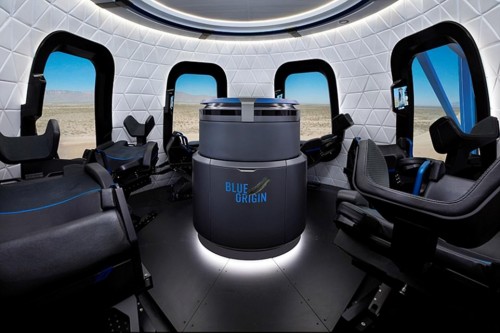 ‘Our New Shepard flight test program is focused on demonstrating the performance and robustness of the system,’ Bezos wrote in an email update.

‘In parallel, we’ve been designing the capsule interior with an eye toward precision engineering, safety, and comfort.’

Blue Origin’s suborbital New Shepard launch system consists of a rocket and capsule designed to fly payloads and passengers to about 100 kilometres (62 miles) above the planet.

Test flights with crew members aboard are expected to begin this year.

The company has not yet set a price for rides, but says its commercial flight programme is on track to begin next year.

Every seat on the flight will have access to a large window, which the company says is made of multiple layers of fracture-tough materials. 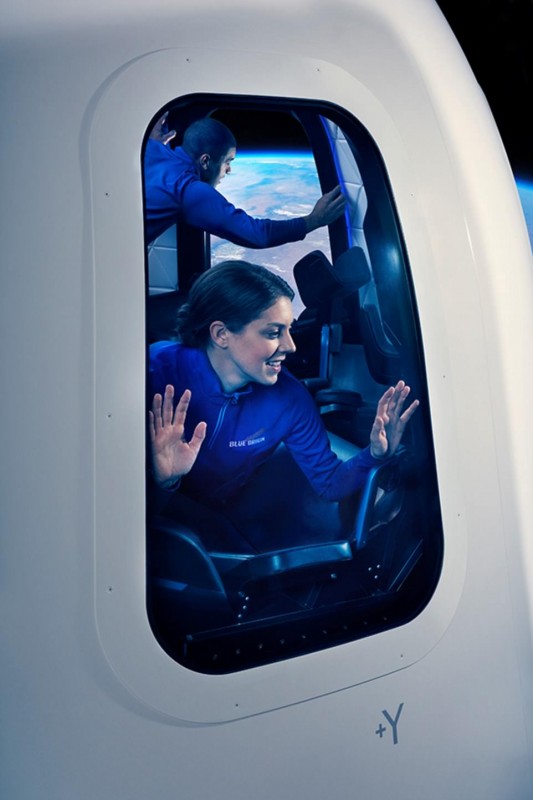 Minimising distortion and reflection, the windows transmit 92 per cent of visible light giving them visibility ‘as good as glass’, according to Blue Origin. 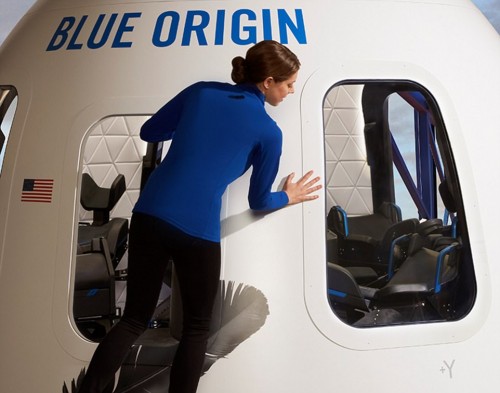 The system consists of a pressurised capsule on top of a reusable booster rocket.

The two vehicles launch together, accelerating for approximately two and a half minutes, before the engine cuts off.

The capsule then separates from the booster to coast quietly into space.

After a few minutes of free fall, the booster performs an autonomous rocket-powered vertical landing, while the capsule lands softly under parachutes, both ready to be used again.

Re-usability allows the company to fly the same system again and again.

The company’s capsule and booster rocket will be on show at the 33rd Space Symposium in Colorado Springs next week.

Earlier this month, Blue Origin unveiled how its New Glenn ‘megarocket’, which will be used to launch space satellites, will operate – and revealed its first customer.

The reusable rocket will be able to land on a drone ship, and is expected to blast off in 2021 with France’s Eutelsat Communications SA as its first customer, Bezos said.

It will compete with Elon Musk’s SpaceX Dragon Heavy, which is expected to send tourists around the moon next year. 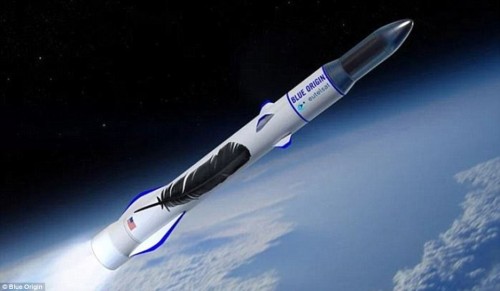 ‘We couldn´t hope for a better first partner,’ Bezos said during a keynote address at the Satellite 2017 conference in Washington.

The target date for the first launch is around 2021, Eutelsat CEO Rodolphe Belmer said.

Like New Shepard, the New Glenn booster is designed to fly itself back to Earth so it can be recovered and re-flown, slashing launch costs.

New Glenn will have about twice the lift capacity of SpaceX´s current Falcon 9 rocket, with the ability to put about 100,000 pounds (45,400 kg) into low-altitude Earth orbits.

Blue Origin will compete with SpaceX, as well as the United Launch Alliance owned by Lockheed Martin Corp and Boeing Co, Europe´s Arianespace and other companies, for commercial satellite launch business.

Eutelsat operates a fleet of 39 communications satellites launched by several companies, including SpaceX, whose launches sell for about $62 million (£50 million), the company’s website shows.

‘We think that our role as an industry leader is to stimulate competition so that there is a stream of innovation … and that access to space is easier,’ Belmer said.

‘When the opportunity of … New Glenn presented itself, we jumped on it.’

Bezos said his goal was to lower the cost of flights so that millions of people can live and work in space.

His vision is to shift energy-intensive, heavy industry into orbit and preserve Earth for human life, while Musk wants to colonise Mars.

The BE-4 engine will be one of seven powering the firm’s  New Glenn 2- and 3-stage rocket.

Like its predecessor the New Shephard and SpaceX’s Dragon, it will be a reusable space vehicle with a first stage capable of returning to the launch site and landing itself upright after each flight.

The New Glenn itself is still years away from its maiden voyage, and the factory where it will be built is still under construction in Cape Canaveral.

The BE-4 engines will undergo rigorous certification at Blue Origin’s West Texas-based test site until then.

Earlier this month Bezos revealed what its first missions could be.

The boss of Amazon, says he wants to start delivering equipment to the moon to help set up the first human settlement.

The Earth-to-Moon cargo delivery service would carry as much as 10,000 pounds of goods to the Moon’s South Pole and could be lifting off in 2020.

It will mainly be delivering equipment that early moon settlers would need, he wrote in a white paper outlining his ideas.

Bezos has already reserved his parking spot near the Shackleton Crater on the South Pole.

The company expects to build six New Shepard vehicles, which are designed to autonomously fly six passengers to more than 62 miles (100 km) above Earth, high enough to experience a few minutes of weightlessness and see the planet set against the blackness of space.