Evidence That Robots Are Winning the Race for American Jobs

Shares
Who is winning the race for jobs between robots and humans? Two leading economists say: the robots. 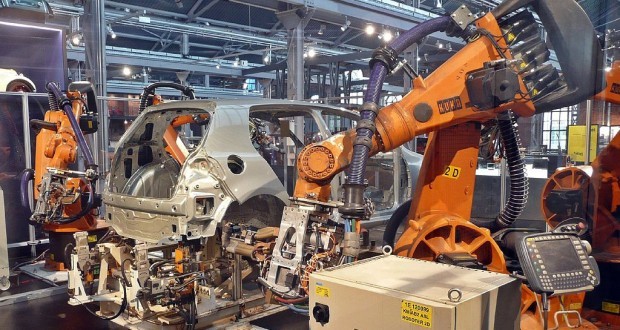 The industry most affected by automation is manufacturing. For every robot per thousand workers, up to six workers lost their jobs and wages fell by as much as three-fourths of a percent, according to a new paper by the economists, Daron Acemoglu of M.I.T. and Pascual Restrepo of Boston University. It appears to be the first study to quantify large, direct, negative effects of robots, according to The New York Times.

The paper is all the more significant because the researchers, whose work is highly regarded in their field, had been more sanguine about the effect of technology on jobs. In a paper last year, they said it was likely that increased automation would create new, better jobs, so employment and wages would eventually return to their previous levels. Just as cranes replaced dockworkers but created related jobs for engineers and financiers, the theory goes, new technology has created new jobs for software developers and data analysts.

But that paper was a conceptual exercise. The new one uses real-world data — and suggests a more pessimistic future. The researchers said they were surprised to see very little employment increase in other occupations to offset the job losses in manufacturing. That increase could still happen, they said, but for now there are large numbers of people out of work, with no clear path forward — especially blue-collar men without college degrees.

“The conclusion is that even if overall employment and wages recover, there will be losers in the process, and it’s going to take a very long time for these communities to recover,” Mr. Acemoglu said.

“If you’ve worked in Detroit for 10 years, you don’t have the skills to go into health care,” he said. “The market economy is not going to create the jobs by itself for these workers who are bearing the brunt of the change.”

The paper’s evidence of job displacement from technology contrasts with a comment from the Treasury secretary, Steve Mnuchin, who said at an Axios event last week that artificial intelligence’s displacement of human jobs was “not even on our radar screen,” and “50 to 100 more years” away. (Not all robots use artificial intelligence, but a panel of experts — polled by the M.I.T. Initiative on the Digital Economy in reaction to Mr. Mnuchin’s comments — expressed the same broad concern of major job displacement.)

The study analyzed the effect of industrial robots in local labor markets in the United States. Robots are to blame for up to 670,000 lost manufacturing jobs between 1990 and 2007, it concluded, and that number will rise because industrial robots are expected to quadruple.

The paper adds to the evidence that automation, more than other factors like trade and offshoring that President Trump campaigned on, has been the bigger long-term threat to blue-collar jobs. The researchers said the findings — “large and robust negative effects of robots on employment and wages” — remained strong even after controlling for imports, offshoring, software that displaces jobs, worker demographics and the type of industry.

Robots affected both men’s and women’s jobs, the researchers found, but the effect on male employment was up to twice as big. The data doesn’t explain why, but Mr. Acemoglu had a guess: Women are more willing than men to take a pay cut to work in a lower-status field.

The economists looked at the effect of robots on local economies and also more broadly. In an isolated area, each robot per thousand workers decreased employment by 6.2 workers and wages by 0.7 percent. But nationally, the effects were smaller, because jobs were created in other places.

Take Detroit, home to automakers, the biggest users of industrial robots. Employment was greatly affected. If automakers can charge less for cars because they employ fewer people, employment might increase elsewhere in the country, like at steel makers or taxi operators. Meanwhile, the people in Detroit will probably spend less at stores. Including these factors, each robot per thousand workers decreased employment by three workers and wages by 0.25 percent.

The findings fuel the debate about whether technology will help people do their jobs more efficiently and create new ones, as it has in the past, or eventually displace humans.

David Autor, a collaborator of Mr. Acemoglu’s at M.I.T., has argued that machines will complement instead of replace humans, and cannot replicate human traits like common sense and empathy. “I don’t think that this paper is the last word on its subject, but it’s an exceedingly carefully constructed and thought-provoking first word,” he said.

Mr. Restrepo said the problem might be that the new jobs created by technology are not in the places that are losing jobs, like the Rust Belt. “I still believe there will be jobs in the years to come, though probably not as many as we have today,” he said. “But the data have made me worried about the communities directly exposed to robots.”

In addition to cars, industrial robots are used most in the manufacturing of electronics, metal products, plastics and chemicals. They do not require humans to operate, and do various tasks like welding, painting and packaging. From 1993 to 2007, the United States added one new industrial robot for every thousand workers — mostly in the Midwest, South and East — and Western Europe added 1.6.

The study, a National Bureau of Economic Research working paper published Monday, used data on the number of robots from the International Federation of Robotics (there is no consistent data on the monetary value of the robots in use.) It analyzed the effect of robots on employment and wages in commuting zones, a way to measure local economies.

The next question is whether the coming wave of technologies — like machine learning, drones and driverless cars — will have similar effects, but on many more people.