Google Kitty Hawk flying car will be available this year

Shares
Kitty Hawk is an electrical aircraft that resembles a flying jet ski. And it does not require a pilot's license and can be mastered in just a few minutes 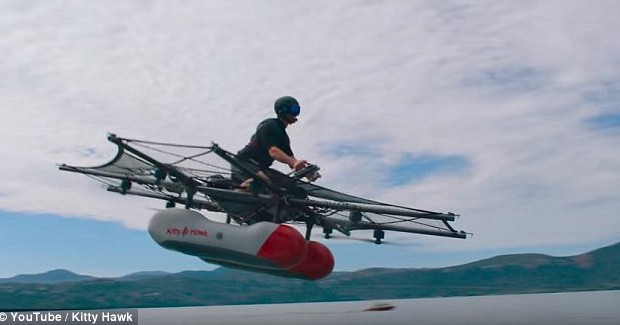 Google co-founder Larry Page’s mysterious flying cars will be available to buy by the end of this year, according to MailOnline.

The billionaire’s company Kitty Hawk has officially launched after months of rumours and speculation.

Clicking on the link gives viewers a full look at a prototype Kitty Hawk vehicle in action.

Kitty Hawk is an electrical aircraft that resembles a flying jet ski.

It doesn’t require a pilot’s license to fly according to the company’s website.

The final version of the vehicle will look quite different to the current prototype, test pilot Cimeron Morrissey wrote in a first-hand review.

The vehicle weighs around 100 kilograms (220lbs) and can hit speeds of up to 25 miles per hour (40kph), Mrs Morrissey wrote. She described the Kitty Hawk as ‘a toy helicopter.’

‘The prototype looks and feels a lot like a flying motorcycle,’ she wrote.

‘You mount the seat and lean forward, just like you would on a bike.

‘The controls are built into a set of handlebars and work similar to buttons and joysticks on a video game controller.

According to the Kitty Hawk site, the machine is ‘safe, tested and legal to operate in the US’, as long as it is flown in ‘uncongested areas.’

Users can learn to fly the strange vehicle in minutes, the company claims.

The prototype can only fly around 10 metres (33ft) over water, and the video of the vehicle shows it gliding over a lake in California.

This prepayment will grant the discount as well as some early test flights with the Kitty Hawk, according to The New York Times.

It was revealed last month that Page’s other flying car company ‘Zee Aero’ registered two new aircraft with the US Federal Aviation Administration on January 18.

Both of the aircraft are all-electric rotary aircraft, meaning they use rotary wings to fly like a helicopter.

The registration files allow Zee Aero to fly the rotorcraft for tests for up to three years.

Kitty Hawk, a subsidiary of Zee Aero that is working on separate flying car designs, registered to fly a four-seater Cessna 172 Skyhawk plane in January – the most-produced aircraft in history.

Page’s creation of Zee Aero in 2010 was kept secret until last year when it was revealed Page had privately invested $100 million (£82 million) in the two separate flying car firms.

Since 2010 Zee Aero has been working on a small, all-electric plane that could take off and land vertically – essentially a flying car.

To date Zee Aero and Kitty Hawk have collectively filed more than dozen different aircraft registrations with the FAA.

The first of these filings was registered in 2014.

See also: A flying car just had a test flight in Germany.

Zee Aero has never publicly acknowledged or demonstrated any of its designs or prototypes.

But last year one of its prototype aircraft was spotted at a remote airfield in California.

Locals said they had even seen it hovering above the ground.

A patent from 2011 emerged in June 2016 showing Zee Aero’s designs for a flying car, and it was now pursuing a ‘simpler, more conventional-looking design.’

Since then it relocated to Hollister, California, where its new design was spotted by locals in October.

The attention-grabbing plane had a high pitched, electric whine, they said.

During two Zee Aero flights witnessed by DK Turbines staff from several hundred yards away in September and October, the aircraft hovered about 25 feet off the ground, and landed rapidly, straight down.

In October an aircraft was spotted being towed down the runway on two consecutive days, although no hovering or flying was observed by witnesses.

Dual propellers in the rear fitted with the description and drawings from the patent, but the aircraft appeared to have a single main wing, with pod-like structures beneath it, rather than the smaller wings at the front and rear shown in the drawings.

In a May 2016 letter to the U.S. Department of Transportation, the firm said it was building ‘an entirely new aircraft that will change personal aviation.’

A Zee Aero spokeswoman said the firm is ‘currently not discussing (its) plans publicly.’