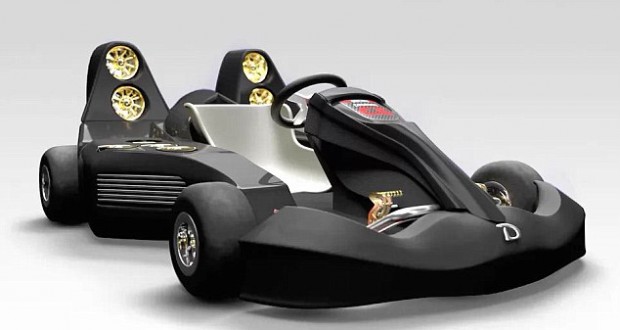 A Canadian firm has unveiled the C5-Blast Ultimate, which is says will be capable of reaching 60 mph (98 km/h) in just 1.5 seconds, according to MailOnline.

The electric engine is helped along by fans, providing both a forward thrust and helping lift the kart up, reducing its weight.

‘Who needs one? No one. Who wants one? Everybody,’ the firm claims on its website.

‘The EDF motors help reduce the weight of the Go-Kart making extremely light and fast.’

The firm boasts future version may even be able to skim above the ground.

‘We could actually make it lighter and faster and at some point the Go Kart would start floating like the Star Wars land speeder or we could add wings and it would fly,’ Aldo Baiocchi, President of Daymak told New Atlas.

‘Speed will not be an issue and we think we can even go eventually under one second 0 to 60 making it faster then any vehicle in existence.’ 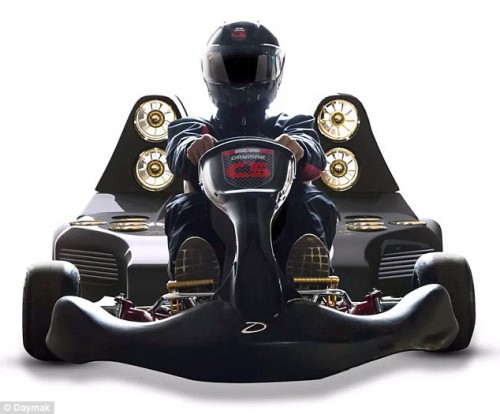 The C5-Blast’s power comes from a 10-kW brushless electric motor fed by a 2,400-Wh lithium-ion battery, but that isn’t the only thing helping it leap off the line.

The driver is also flanked by four Electric Ducted Fan (EDF) motors that provide 60 kg (132 lb) of forward thrust, while eight more are mounted in the bodywork providing 96 kg (212 lb) of upwards thrust.

Daymak admits that the technology is still at the early stages so hasn’t said exactly how fast its world’s fastest go-kart will go, but the company plans to sell two different versions, with wildly different price tags.

The C5-Blast prototype isn’t shown on the track in the video below, but you can get a taste of the jet engine-like sound the kart’s fans generate.

The record-breaking Formula Student electric car was developed and built in less than a year by a team of 30 students at ETH Zurich and Lucerne University of Applied Sciences and Arts.

Carbon-fibre materials are used throughout, and, grimsel weighs just 168 kg.