Shares
Flying the biggest satellite that SpaceX has ever launched, weighing in at more than 6 metric tons, proved a routine piece of business for the company’s Falcon 9 rocket yesterday. 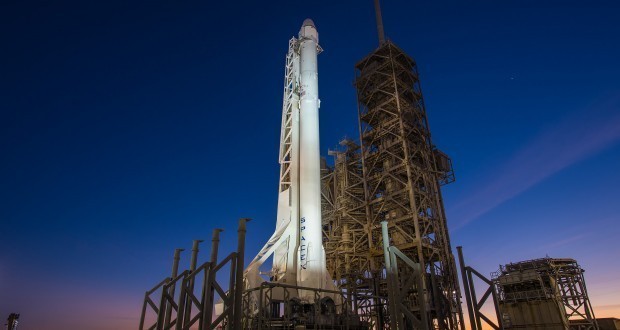 The Inmarsat-owned satellite, built by Boeing, was originally scheduled to fly on a larger rocket, the Falcon Heavy, that SpaceX hopes to debut later this year, according to Quartz.

Flying the big bird on a smaller rocket required some sacrifices on SpaceX’s part—the first stage booster could not be recovered for potential re-use, for example, since much of the fuel necessary would be used in flight. But the success puts the company on a path to finally hit its long-dreamed-of high-speed launch cadence.

SpaceX has been hoping to out-fly its competitors for the last several years, planning on a dozen to even 18 launches in a single calendar year. But in 2015, a mid-flight explosion grounded SpaceX’s rocket for six months, putting a kibosh on those plans, and a 2016 refueling mishap required four months of work to ensure the rocket was ready for flight.

Now, having launched six rockets before the halfway point of 2017, the company looks set to hit its goals and finally fly more rockets than its incumbent competitors, the Boeing-Lockheed Martin joint venture United Launch Alliance, and the European champion Arianespace. That’s striking, given that SpaceX’s first commercial mission was in 2012. (ULA was formed in 2006, and Arianespace in 1980.)

This year, Arianespace has been the victim of circumstance, with its major spaceport becoming a pawn in a political battle between impoverished French Guianans and the mainland French government. The protests have now been resolved, allowing the company to start launching again.

For the rest of this year, SpaceX has plenty to do. It will launch a Bulgarian television satellite, and communications birds for Intelsat, Iridium, SES, and Echostar. It is expected to launch satellites on behalf of Taiwan and South Korea. And the company plans to launch its own demonstration satellite to provide internet access. Perhaps most importantly, it will fly three missions to the International Space Station for NASA, as well as demonstrating an uncrewed flight of its new astronaut-carrying space capsule. Plus, it expects to fly the experimental Falcon Heavy.

That’s a lot of work—at least a dozen more missions—and it will require the company’s engineers and technicians to move fast and carefully, with no major mishaps. The company’s goal has long been a mission cadence of one flight every two weeks, a pace it hit this month and in March but has yet to sustain over time. The tiny signals of progress are there—during yesterday’s launch, the company began loading liquid oxygen into the rocket ten minutes later than usual, part of an effort to compress and shorten the countdown process.

The rewards of frequent launches are clear: Besides establishing the Falcon 9’s reliability, and the constant stream of data used by engineers after every launch to refine the vehicle, each launch represents revenue won by SpaceX.

While the company brushed off financial concerns after its 2016 mishap, with officials noting that it had no debt and $1 billion in cash on its books, replenishing its coffers will give SpaceX greater security and more resources to tackle big projects ahead—including its mooted satellite internet constellation and an inter-planetary transportation system for reaching Mars.