Shares
Toyota is working with startup Cartivator to develop the SkyDrive flying car in time to light the torch at the 2020 Olympic Games. This is just one of many flying car projects in motion right now. 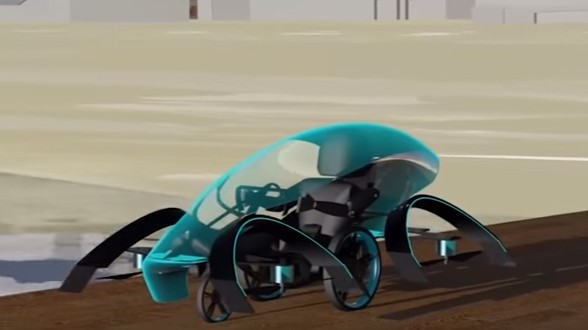 According to Futurism, Toyota is throwing its hat into the flying car ring, backing the “SkyDrive” flying car, the brainchild of a startup called Cartivator.

The drone-esque, 2.9 meter (9.5 foot) long SkyDrive vehicle is designed to max out at speeds of up to 100 km/h (62 mph) as it floats 10 meters (33 feet) above the ground. It would be simple and intuitive enough for a non-pilot to control, and could simply take off from the regular old highway.

Cartivator consists of about 30 volunteers led by Tokushima University drone expert Masafumi Miwa, but they’re not going it alone. They’re also backed by Toyota’s mechanical engineers, not to mention its 40 million yen ($353,000). The group is also getting support from Taizo Sun, the founder of GungHoOnline Entertainment, along with an enthusiastic group of crowdfunders who have pledged about 2.5 million yen ($22,000) to help the group meet its goal: getting SkyDrive in the air by 2018 and commercialized in time to be the torchbearer for the 2020 Tokyo Olympic games.

Toyota isn’t the only big company who’s looking to get in on the perennial flying car dream. Ehang of China, Lilium Aviation of Germany, AeroMobil, Uber, and the Kitty Hawk startup project from Larry Page are all working on flying cars. Anything related to developing aircraft is heavily regulated — particularly in the U.S. — making each step of the way cost extensive amounts of money and time. According to Kazuyuki Okudaira of Nikkei Asian Review, Toyota’s leadership is taking a pro-innovation investment standpoint on the flying car issue: “Chairman Takeshi Uchiyamada decided ‘things will not progress if you wait and provide money only when the technology is ready.’”