Shares
A teenager from India recently won a satellite-design competition co-sponsored by NASA. His winning invention, probably the world's lightest satellite, will be launched by NASA this June for a sub-orbital test flight. 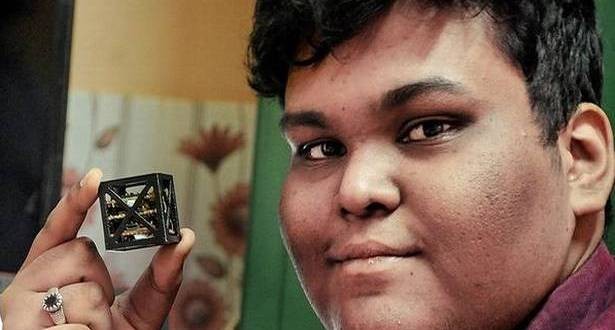 Not very many people can claim that they’ve sent something they made into space. One of those who will soon be sending his own invention — a 64-gram (0.14-lb) satellite — into sub-orbital flight is an 18-year-old named Rifath Shaarook. His satellite design won a competition hosted by an organization called I Doodle Learning, which is sponsored by NASA and the Colorado Space Grant Consortium, called Cubes in Space, Joinfo.com reports with reference to Futurism.

“The main challenge was to design an experiment to be flown to space which would fit into a four-meter cube weighing 64 grams,” Shaarook says. He named his tiny winning satellite the KalamSat, after Indian nuclear scientist and former president, A.P.J. Abdul Kalam.

It’s set to embark on a 4-hour sub-orbital mission, launching from NASA’s Wallops Flight Facility in Virginia on June 21. “We designed it completely from scratch,” Shaarook said, “It will have a new kind of on-board computer and eight indigenous built-in sensors to measure acceleration, rotation, and the magnetosphere of Earth.”

Cubes for Space is an example of how NASA’s been actively seeking out talents and minds outside of just the agency. NASA has, among other programs, a program called Open Innovation, where it employs the help of the public “for outside-the-box thinking about human space exploration challenges.” Such crowdsourcing efforts seem to be fruitful for the space agency, and the KalamSat is just one proof.

The KalamSat will spend about 12-minutes in a micro-gravity environment of space, where it will test the durability of its extremely light casing, 3D-printed from reinforced carbon fiber polymer. “The main role of the satellite will be to demonstrate the performance of [3D-printed] carbon fiber,” Shaarook explained to the Times of India. The success of the satellite could lead to the development of similar technology: such lightweight payloads would certainly be more cost-effective for NASA. The space agency is seeking innovative ideas for payload service, too: back in March, they wrapped up an open call for payload concepts for a mysterious mission.