Shares
In the first game of his match with AlphaGo—the Go-playing machine built by researchers at Google’s DeepMind lab—Chinese grandmaster Ke Jie opened with a move lifted straight from the arsenal of this artificially intelligent machine. 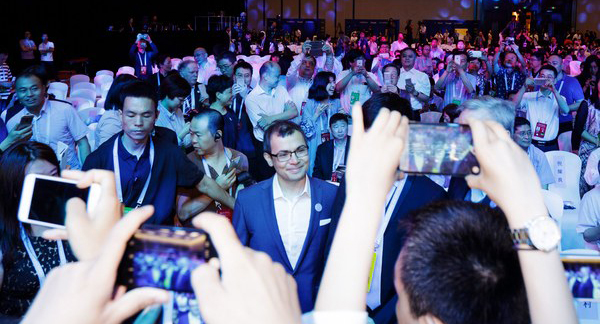 Ke Jie aimed to beat AlphaGo with its own unusual style of play. But the ploy didn’t quite work as the 19-year-old grandmaster planned. After a four hours and fifteen minutes of play, Ke Jie resigned, and AlphaGo grabbed a 1-0 lead in this best-of-three match, Joinfo.com reports with reference to Wired.

Last year, in South Korea, AlphaGo topped the Korean grandmaster Lee Sedol, becoming the first machine to beat a professional Go player—a feat that most AI researchers believed was still years away, given the extreme complexity of the ancient Eastern game. Now, AlphaGo is challenging Ke Jie, the current world number one, and according to Demis Hassabis, the CEO and founder of DeepMind, the machine is underpinned by a new and more powerful architecture suited to not just to Go but a wide range of real-world applications.

During the first game, Ke Jie was well aware of the change. “AlphaGo is a completely different player,” he said through an interpreter during the post-game press conference. “It is like a god of a Go player.”

In January, under the pseudonym “Master,” the machine’s new incarnation played several of the world’s top players in a series of online matches, including Ke Jie, and it won all sixty of its completed contests. But this week’s match is AlphaGo’s first public appearance with its new architecture, which allows the machine to learn the game almost entirely from play against itself, relying less on data generated by humans. In theory, this means DeepMind’s technology can more easily learn any task.

Given the machine’s strong showing during the “Master series,” Ke Jie is unlikely to win this week’s match, but the contest is an opportunity to gage the continued progress of AlphaGo and, indeed, AI in general. Underpinned by machine learning techniques that are already reinventing everything from internet services to healthcare to robotics, AlphaGo is a proxy for the future of artificial intelligence.

This was underlined as the first game began and Hassabis revealed that AlphaGo’s new architecture was better suited to tasks outside the world of games. Among other things, he said, the system could help accelerate the progress of scientific research and significantly improve the efficiency of national power grids.

For Google, the match is also an enormous PR opportunity, as the company angles to offer its online services in China. Though the company’s Android operating systems runs millions of phones in the country, the company does not offer official access to online services such as Gmail and Google Search, due to local government restrictions. But the company has said it hopes to offer its services here in the future. As reporters arrived to cover the match, they received, among other things, a flyer describing Google’s Translate app—in both English and Chinese. Google Translate is now driven by deep neural networks, a breed of machine learning that also feeds AlphaGo.

As the match began, Ke Jie chose to play black, meaning he would make the first move, and he opened with what’s called a “3-3 point” strategy—a rather unusual opening that AlphaGo played regularly during the Master series in January. “He has changed since the Master games six months ago,” match commentator Michael Redmond said of Ke Jie. “He is using a lot of Master’s moves.”

Indeed, since the Master series, Ke Jie has regularly used this kind of opening during matches with other grandmasters. “The influence of alpha has been widespread,” Ke Jie said after the game. For Hassabis, this is further evidence that AlphaGo was changing the way grandmasters play the ancient game—and an indication of how artificial intelligence can augment what humans do, just eclipse them.

But according to Hassabis, the machine, by its own calculation, responded well to Ke Jie’s opening. And indeed, it took hold of the match much sooner than even the DeepMind team expected. Just three and a half hours into the game—which was slated for six or more—AlphaGo dominated so much the board, match commentators gave Ke Jie little chance of clawing this way back into the match. Less than an hour later, he resigned.

“What’s exciting is that AlphaGo just keeps getting better,” said commentator Hajin Le. “It was already so good before.