Soft 3D-Printed Robot Is Agile Even on Sand and Rocks

Shares
As a headless robot crawls over a pile of pebbles, its jointless, rubbery legs carefully but confidently sample the terrain in steady, yet unrushed movements that resemble a turtle's. 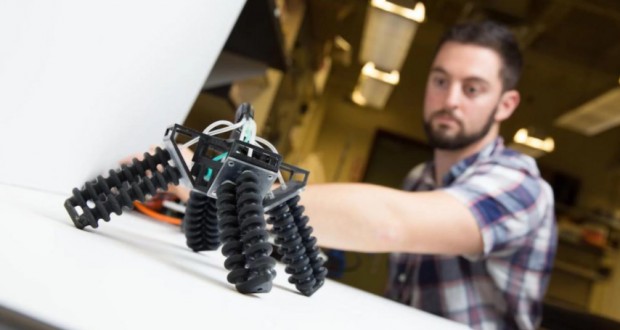 The robot’s ability to reliably walk across different types of surfaces is unique, and so is the fact that its elaborately shaped legs were created with a 3D printer, according to the engineers who developed the bio-inspired creature, Joinfo.com reports with reference to Live Science.

“With soft robots, you can do a lot of things that are difficult for a hard robot,” said Mike Tolley, a mechanical engineering professor at the University of California, San Diego, who led the research. “[F]iguring out exactly how to place parts of your body or get around in a very unpredictable environment becomes a lot easier when your body is soft.”

The combination of soft and stiff materials enables living creatures to adjust to the irregularities in terrain that frequently stop current rigid robots in their tracks.

But the new robot, which will be presented at the IEEE International Conference on Robotics and Automation in Singapore next week, is a big step forward in robotic agility, according to Tolley.

The robot can be seen nimbly creeping into a narrowing corridor, just like a real animal would. Its four legs, positioned in an “X” shape, can alternate between walking, climbing and crawling — or even a type of motion that resembles swimming. The robot can move forward and backward, and can rotate and move sideways without needing any sensors to “see” the environment, the scientists said. Its speed, however, is rather modest — about 0.8 inches (20 millimeters) per second.

The researchers said this nimble bot could have a variety of future applications.

“We see it could be useful in search and rescue, being able to crawl through rubble, but we would also like to use it in the study of nature,” Tolley told Live Science. “Biologists could, for example, send it into tunnels that turtles dig to see what is in there without being too disruptive.”

The key to the robot’s abilities is in its soft 3D-printed legs, which consist of three connected spiral-like tubes made of a carefully designed combination of soft and rigid materials.

“What people —including myself — have done previously, is make legs that are essentially bent in one direction, and that’s relatively easy to make with something like molding,” Tolley said. “But when you want to make something that bends not only in one way but bends in any direction, then you need a more complicated design, and that’s what we focused on.”

The researchers first modeled the legs digitally and tried to predict how they would behave in certain situations — for instance, on a soft, sandy surface or when navigating over rocks and pebbles.

Subsequently, the scientists used a sophisticated 3D printer to create the legs, which are hollow inside and inflatable. The amount of pressure and order in which the pistons are inflated determines the robot’s gait, the researchers said.

“This particular robot is tethered to a control system, and we are definitely looking at how we could get all the components on board so that we can make it untethered and completely autonomous,” Tolley said.