Shares
Zuckerberg gave a passionate speech at Harvard Thursday — he teared up at one point near the end. 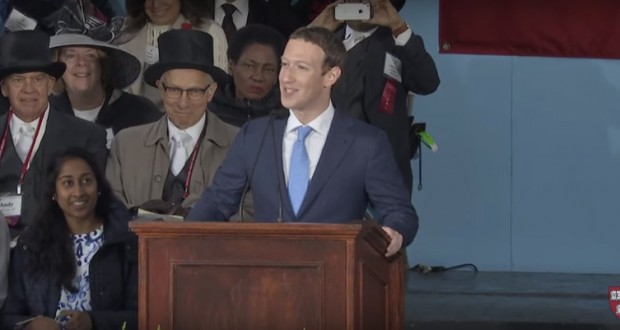 Facebook CEO Mark Zuckerberg is trying to change the world — and he thinks Harvard’s graduating class can and should be doing the same, Recode reports.

Zuckerberg gave the commencement address Thursday at Harvard College, the place where he founded Facebook before dropping out, and where he finally returned to receive an honorary degree.

The speech felt, at times, very political, and Zuckerberg mentioned a number of social, fiscal and environmental issues that are important to him throughout the address.

Among those issues was immigration. At one point late in the 30-minute-long speech, Zuckerberg started tearing up when talking about an undocumented high school student he mentors. The student may not get to go to college because he’s not a U.S. citizen. “It says something about our situation today that I can’t even say his name because I don’t want to put him at risk,” Zuckerberg said, visibly emotional.

Zuckerberg, 33, the youngest person to deliver a Harvard commencement address, gave his talk as attendees hid from the rain under ponchos and umbrellas. Zuckerberg’s speech, which he wrote himself, was impassioned, especially for the Facebook CEO who can be very scripted, especially in public.

Immigration wasn’t the only political theme Zuckerberg touched on during the speech. He also mentioned the rising cost of college education, the idea of a universal living wage, and the troubling effects of climate change. “It is time for our generation-defining great works,” he told students. “How about stopping climate change before we destroy the planet? … How about curing all diseases?”

Zuckerberg has said on numerous occasions now that he isn’t running for political office, but the speech gave those who believe that he’s preparing for a political run a lot of material to work with. He’s long positioned Facebook as a service void of political agendas, but it was clear from his speech Thursday that Zuckerberg himself has a lot of strong views on a lot of important issues.

All of these references were connected under the broader theme of “purpose,” and Zuckerberg used his time to impress upon students the need to build a better world for others — specifically, helping others find purpose in life.

“I’m not here to give you the standard commencement about finding your purpose,” Zuckerberg said toward the beginning of the address. “We’re millennials. We try to do that instinctively. Instead, I’m here to tell you that finding your purpose isn’t enough. The challenge for our generation is to create a world where everyone has a sense of purpose.”

This is hard, Zuckerberg said, because the world is changing quickly and the kinds of things that used to give people purpose, like their jobs or their real-life communities, are changing, too.

“When our parents graduated, that sense of purpose reliably came from your job, your church, your community,” he said. “But today, technology and automation are eliminating many jobs. Membership in a lot of communities is declining. And a lot of people are feeling disconnected and depressed, and are trying to fill a void in their lives.”

Zuckerberg said students should focus on three major ways to help instill more purpose in their own lives, but also in others’ lives: Tackling big projects, like curing all disease; creating equality, like making education affordable for everyone; and building better offline and online communities.

In the section on big projects, Zuckerberg talked about his own struggles in Facebook’s early days. He recounted a story of when his top-ranking executives and investors all wanted him to sell the company early on, but he resisted. Many of the executives quit, and Zuckerberg said his decision not to sell “tore our company apart.”

“I felt alone. And worse, it was my fault,” he said. “I wondered if I was just wrong. An imposter. A 22-year-old kid who had no idea how things actually worked.”

But then he added, “Now, years later, I understand that is how things work when there’s no sense of higher purpose.”

The focus on community in particular is something that Zuckerberg has long pushed, and its quite frankly the backbone of Facebook’s connect the entire world mission. He often refers to Facebook’s users as “the community,” and when he penned a near 6,000-word manifesto earlier this year on his vision for the world, it was titled “building global community.”

These beliefs are also visible in Zuckerberg’s philanthropic work, specifically his decision in late 2015 with wife Priscilla Chan to give away all of their wealth during their lifetime to philanthropic causes. That effort, which is driven by the Chan Zuckerberg Initiative, is focused on things like curing all disease and personalized learning.

“Yes, giving everyone the freedom to pursue purpose isn’t going to be free,” Zuckerberg said. “People like me should pay for it. And a lot of you are going to do really well and you should to.”