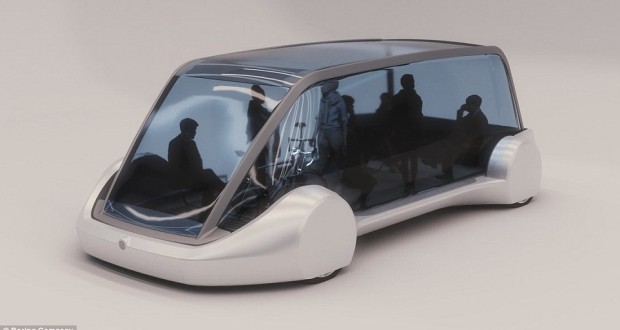 Elon Musk’s ‘Boring Company’ plan to build a network of tunnels under major cities – but so far has only shown car owners using them. Now, the firm has revealed its own vehicle – an underground electric bus, Joinfo.com reports with reference to MailOnline.

The vehicles, based on the same ‘electric sled’ that owners will drive their cars onto, have space for seated and standing passengers.

They are mainly glass – even though they are designed to travel underground.

Musk has come under fire repeatedly from experts claiming it is impractical and would be impossible to implement.

Earlier this month the firm published an FAQ on its website outlining how it plans to achieve his vision.

‘The key to making this work is increasing tunneling speed and dropping costs by a factor of 10 or more – this is the goal of the Boring Company,’ it says. 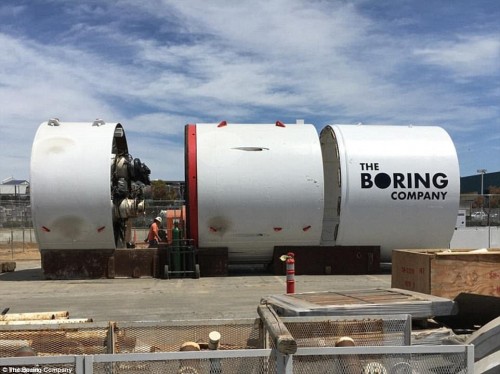 ‘Unlike flying cars, tunnels are weatherproof, out of sight and won’t fall on your head,’ it explains.

‘A large network of road tunnels many levels deep would fix congestion in any city, no matter how large it grew (just keep adding levels)’

Musk recently revealed it has begun work on its first tunnel beneath Los Angeles, which will stretch from LAX to Sherman Oaks when complete.

It has been just six months since Musk first revealed his radical plan to beat LA’s notorious gridlock – and now, the entry hole, staging area, and starting tunnel for the first Boring Machine, ‘Godot,’ is complete, Musk says.

Critics have slammed the plan as completely unrealistic as it would require a mass of permits and huge disruption as hundreds of tunnels and access ‘lifts’ are dug.

It is also unclear if the machine has actually been used to dig anything – with images of an electric ‘sled’ having been filmed in another nearby tunnel SpaceX has been using to test pods for Musk’s Hyperloop.

However, Musk says the area is ripe for innovation.

‘Currently, tunnels are really expensive to dig, with some projects costing as much as $1 billion per mile,’ the new FAQ says.

‘In order to make a tunnel network feasible, tunneling costs must be reduced by a factor of more than 10.’

The key to this is smaller tunnels that can be dug more quickly, the FAQ says.

‘To build a one-lane road tunnel, the tunnel diameter must be approximately 28 feet.

‘By placing vehicles on a stabilized electric sled, the diameter can be reduced to less than 14 feet.

Reducing the diameter in half reduces tunneling costs by 3-4 times.

‘Secondly, increase the speed of the Tunnel Boring Machine (TBM).

‘A snail is effectively 14 times faster than a soft-soil TBM.

‘Our goal is to defeat the snail in a race.’

Musk envisions a new breed of smaller, more powerful TBMs with triple the power of current machines that can tunnel continuously.

‘In the United States, there is virtually no investment in tunneling Research and Development (and in many other forms of construction).

‘Thus, the construction industry is one of the only sectors in our economy that has not improved its productivity in the last 50 years,’ it concludes.