Shares
Stratolaunch, the company backed by billionaire Paul Allen to develop air-launch systems, rolled out its giant carrier aircraft for the first time May 31 in advance of ground and flight tests. 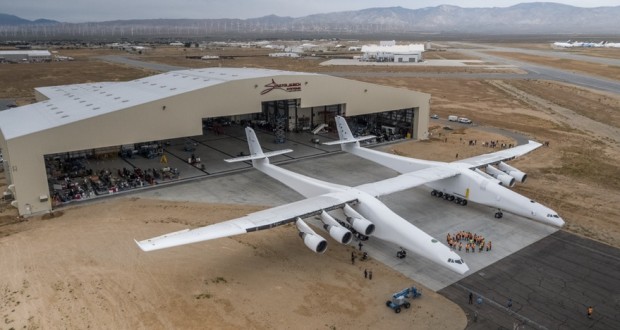 The aircraft moved out of its hangar at the Mojave Air and Space Port in California for the first time since construction of the giant plane began there several years ago. Two tugs towed the aircraft, resting on its 28-wheel landing gear, just outside the hangar to begin a series of tests, according to Spacenews.

“This marks the completion of the initial aircraft construction phase and the beginning of the aircraft ground and flight testing phase,” Jean Floyd, chief executive of Stratolaunch Systems, said in a statement about the rollout.

The aircraft’s test program will begin with fueling tests, where each of the plane’s six fuel tanks is independently filled to test their fueling mechanisms and check for leaks. The tanks will then be drained and the plane moved back into the hangar for weight and balance testing, according to a company fact sheet.

Stratolaunch then plans ground and engine tests, including taxi tests at the airport, in the “coming weeks and months,” Floyd said, before the airplane’s first flight. “This is a first-of-its-kind aircraft, so we’re going to be diligent throughout testing and continue to prioritize the safety of our pilots, crew and staff,” he said. “Stratolaunch is on track to perform its first launch demonstration as early as 2019.”

The Stratolaunch aircraft is the largest in the world by wingspan, measuring more than 117 meters from tip to tip. The plane weighs 226,800 kilograms empty, and 50 percent more when fully fueled. It can accommodate payloads weighing nearly 250,000 kilograms, attached to the wing segment between the twin fuselages.

Allen, the co-founder of Microsoft, announced Stratolaunch in late 2011. The aircraft’s size was dictated by initial plans to launch medium-sized payloads using a version of SpaceX’s Falcon 9. The companies parted ways a year later, and Stratolaunch then signed a contract with Orbital Sciences Corp. (now Orbital ATK) to develop a new rocket also for medium-class payloads. That project, known as Thunderbolt, has also been set aside.

Stratolaunch is now focused on the growing demand for small satellites. In October 2016, the company announced a new partnership with Orbital ATK where the Stratolaunch aircraft will be used for launches of Pegasus XL rockets, potentially up to three on a single flight.

Floyd, in the statement, said Stratolaunch was also looking at other vehicles as it makes preparations for accommodating Pegasus rockets at its Mojave hangar. “We’re actively exploring a broad spectrum of launch vehicles that will enable us to provide more flexibility to customers,” he said, without identifying the vehicles under consideration.

The company, funded by Allen, has not disclosed how much money it has spent on the project to date. However, in a May 1 panel session here on ultra low-cost access to space, Floyd was asked if his company was ready to spend “hundreds of millions of dollars” on technologies to reduce launch costs. “Definitely yes, and we already have,” he responded.

Floyd, earlier in that panel, said that Allen’s investment in Stratolaunch was not motivated by any potential financial return. “His vision is to change the human condition,” Floyd said of Allen. “He’s not out to make a buck. He’s not out to get a return on investment.”

“I’m not saying he wants to lose money,” he added. “But Paul Allen has never talked to me about, ‘How much money am I going to make if I pull this off?’”