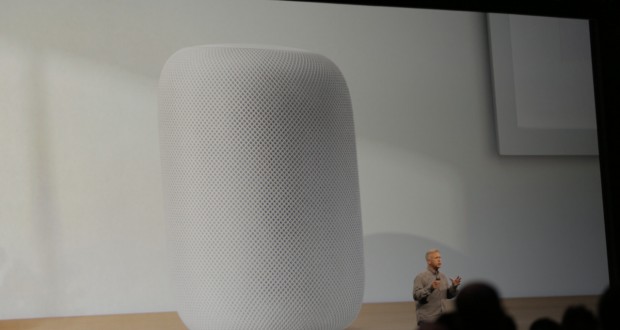 “We want to reinvent home music,” Apple CEO Tim Cook said at the company’s WWDC keynote. The Apple Speaker is focused on music first, not Siri, according to TechCrunch.

The device is a pill-shaped circular speaker. It has a seven beam-forming tweeter array. It has a custom-made woofer and an Apple A8 chip. It has multi-channel echo cancellation, real-time acoustic modeling and more.

The HomePod can scan the space around it to optimize audio accordingly. Schiller spent a lot of time talking about how good it sounds. It’s hard to know for sure when you’re listening to a song coming out of giant speakers in a conference hall.

Of course, the speaker works well with Apple Music. You can talk to the speaker to play anything in your Apple Music library and more. You can say “play more songs like that,” or “I like this song.”

You also can ask other Siri queries, such as news headlines, the weather, sports scores and more. And if you have HomeKit-enabled devices, you can control your lights, garage door, air conditioning and more using this speaker.

It’s going to cost $349. It comes in white and space grey. It starts shipping in the U.S., the U.K. and Australia. Other countries will get HomePods next year.