Shares
A research team says it has developed a snake-like robot that can climb over debris and rubble by shooting a jet of air to lift its front end from the ground. 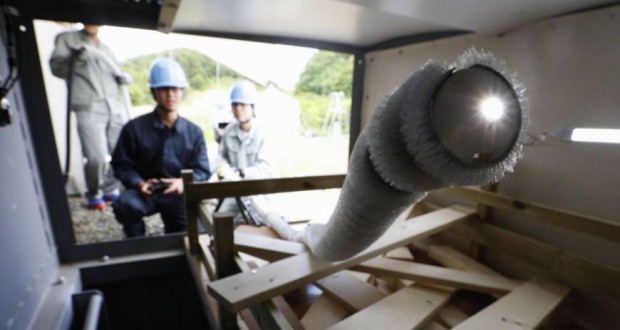 It is the first snake-shaped robot in the world that can move with its front tip off the ground, according to the team, which includes members from Tohoku University in Sendai, according to The Japan Times.

The Tohoku region was devastated by the March 11, 2011, Great East Japan Earthquake and tsunami.

The robot will provide important capabilities during search and rescue operations because it can enter a collapsed building and look for people trapped inside with the camera mounted on its front tip, the team said.

After working to improve durability, the team aims to put the device to practical use in three years.

The plastic robot is 8 meters long and weighs around 3 kg. It is covered with short brush-like hairs that vibrate, allowing the robot to move forward at a pace of 10 cm per second.

It was already used in a survey at the Fukushima No. 1 nuclear power station, the site of the 2011 nuclear disaster.

Problems included getting stuck on obstacles and having the view from its camera obstructed.

The team made improvements that allowed the robot to climb over an object up to 20 cm high.

With the robot’s head rearing up like a snake’s, situation assessments by camera became much easier and changing directions much faster.

Team member Satoshi Tadokoro, a Tohoku University professor, said Monday that the team’s robots will be able to do things that would be difficult for humans, such as searching collapsed homes after earthquakes and carrying out checks on infrastructure.

Read also: Soft 3D-Printed Robot Is Agile Even on Sand and Rocks