Home / Tech / In China, a robot has started delivering packages to people

In China, a robot has started delivering packages to people 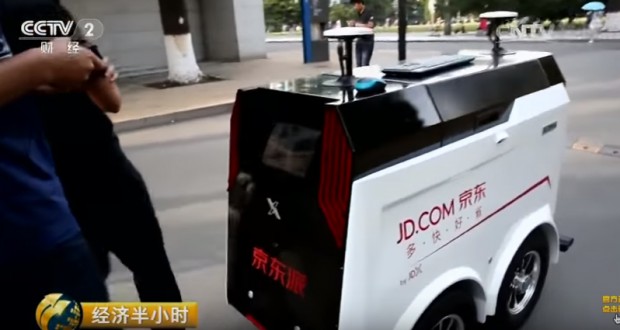 Jingdong, or JD.com, China’s second-biggest e-commerce company after Alibaba, sent robots to deliver items for the first time yesterday (June 18), on the last day of a two-week-long shopping bonanza that recorded sales of around $17.6 billion, according to a spokesman with the company, Quartz reported.

Designed by JD, the white, four-wheeled droid can carry five packages at once and travel 20 km (12.4 miles) if fully charged. It can climb up a 25-degree incline (link in Chinese), and find the shortest route from warehouse to destination. Once it reaches its destination, the robot sends a text message to notify the recipient of the delivery. Users can accept the delivery through face-recognition technology or by using a code, according to China’s state broadcaster CCTV.

It’s the first time that the company has used delivery robots in the field. JD tested its first delivery robot in November, when the research and manufacturing cost of a single robot was almost the price of an Audi Q7 series car, around 600,000 yuan ($88,125), JD’s driverless program engineer Zhang Chao told CCTV. The company has since lowered the cost to around 50,000 yuan ($7,343). Robots can reduce the delivery cost from 7 yuan ($1) per human delivery to 1.5 yuan ($0.2) per robot delivery, said Zhang.

In their first mission yesterday, the bots delivered packages in Beijing university campuses such as Tsinghua University and Renmin University.

JD is also testing the world’s largest drone-delivery network, including flying drones carrying products weighing as much as a metric ton, or about 2,200 lbs.

“Our logistics systems can be unmanned and 100% automated in 5 to 8 years,” said Liu Qiangdong, JD’s chairman.