Shares
Toyota has completed the first in-home trial of the Human Support Robot (HSR) of a robot designed to help those with limited mobility carry out everyday tasks. 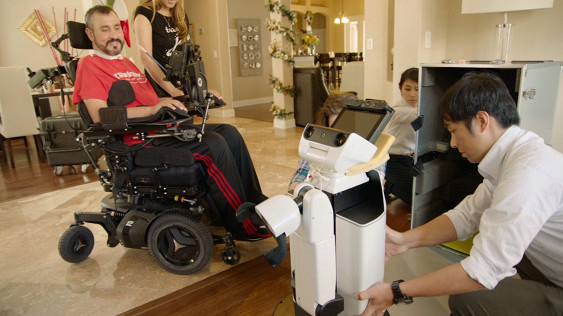 The Human Support Robot (HSR) has been created several years ago but remained in the lab until the team has recently decided to try it in the real world, Joinfo.com reports with reference to Digital Trends.

These robots are already used in some hospitals in Japan, but recently one of these robots was modified to help with everyday tasks to Romulo “Romy” Carmago, a decorated veteran, who was severely injured in Afghanistan and now is paralyzed below the neck.

Romulo is almost completely paralyzed, he gives commands to the robot using a mouth stick to tap out commands on a tablet on the chair. The robot can pull the curtains, bring water, turn on the light or open the door. It can also understand voice commands.

The HSR is about a meter tall and features a telescopic body, extendable folding arm, and flexible hand. The current version of the sensor-laden robot responds to QR-like codes placed on various objects about the home that help it to build up a map of its operating area.

“This is a big game changer for everybody that has a disability,” Romy said, adding that the HSR could be part of “the next chapter of human support robots helping people with disabilities.”

Toyota is still working on the robot’s design and plans to use its experience with Romy to make it even more useful and efficient.