Shares
Engineers of the University of Washington created the first battery-free cellphone that uses just a few microwatts to make a call. 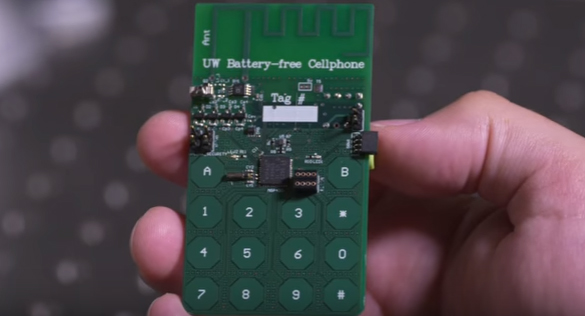 Researchers of the Allen School of Computer Science & Engineering and the University of Washington Department of Electrical Engineering have developed a mobile phone that lets you call without battery. The device extracts its power from ambient radio signals and light.

The technology is still in its infancy: the radio signals by which the device was powered out came from a base station ten meters away. If a small solar panel the size of a rice grain was also used, the base station could be at a distance of about fifteen meters, according to the engineers.

For the time being, the radio signals supply only a few micro-watt, but by making a more economical phone it can be enough for it to work. Normally, it takes a lot of energy to convert analog audio signals into a digital signal, which is then transmitted via a mobile network.

To save energy, the economical phone uses a different process, where vibrations recorded by the microphone as analogue radio signal are being forwarded to the base station.

This means that the economical phone can not connect to existing mobile networks. But, according to scientists, it is possible to refine technology within the foreseeable future so that the battery-free mobile can work with providers’ networks or consumers’ home routers.

The revolutionary technology was published on July 1 in the Proceedings of the Association for Computing Machinery on Interactive, Mobile, Wearable and Ubiquitous Technologies.