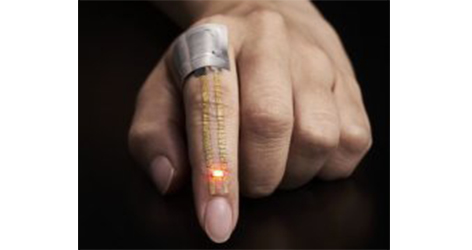 According to Science Daily, the Japanese scientists have developed a new hypoallergenic electronic sensor that can be worn on the skin continuously for a week without discomfort, and is so light and thin that users forget they even have it on.

The group developed an electrode constructed from nanoscale meshes containing a water-soluble polymer, polyvinyl alcohol (PVA), and a gold layer — materials considered safe and biologically compatible with the body. The device can be applied to the skin by spraying a tiny amount of water, which allows it to stick easily to the skin — it conformed seamlessly to curvilinear surfaces of human skin, such as sweat pores and the ridges of an index finger’s fingerprint pattern.

The researchers next conducted a skin patch test on 20 subjects and detected no inflammation on the participants’ skin after they had worn the device for a week. The group also evaluated the permeability, with water vapor, of the nanomesh conductor — along with those of other substrates like ultrathin plastic foil and a thin rubber sheet — and found that its porous mesh structure exhibited superior gas permeability compared to that of the other materials.

“It will become possible to monitor patients’ vital signs without causing any stress or discomfort,” says Someya about the future implications of the team’s research. In addition to nursing care and medical applications, the new device promises to enable continuous, precise monitoring of athletes’ physiological signals and bodily motion without impeding their training or performance.

According to the edition, the elastic electrode promises the development of noninvasive e-skin devices that can monitor a person’s health continuously over a long period of time.