Home / US / Duchess of Cambridge in elegant dress at the gala in the U.S.

Duchess of Cambridge in elegant dress at the gala in the U.S.

Shares
The stay of Prince William and Kate Middleton in New York City came to an end, culminating in a gala reception at the Metropolitan Museum. 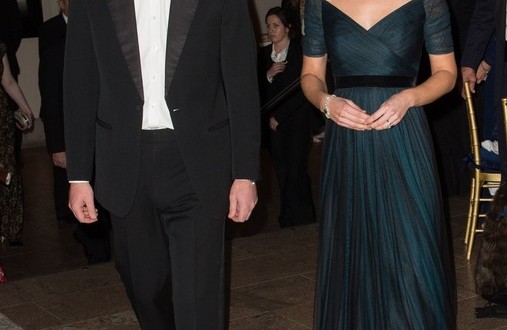 This time, the Duchess of Cambridge famous for her passion for modest outfit pleased her fans with a luxurious evening dress, joinfo.ua reports. Kate Middleton came in a floor-length deep blue-green dress by Jenny Packham. In addition, Kate's sophisticated dress was supplemented with the family jewelry of the British royal house: large diamond bracelet and diamond earrings with emeralds.

However, the dinner was aimed not at demonstration of exquisite dresses but charity. All funds collected at this gala dinner will be handed to the development of the University of St. Andrews in Scotland. That is why the reception was attended by a large number of Scots living in the U.S.

During the social event Prince William spoke about the importance of education. The guests were not grudge to donate from 2 to 10 thousand dollars for the noble idea.

As it was previously reported, Prince William and the Duchess of Cambridge attended a basketball game, where they met Beyoncé and Jay-Z. Both couples had a chance to get acquainted and talk in informal surroundings.