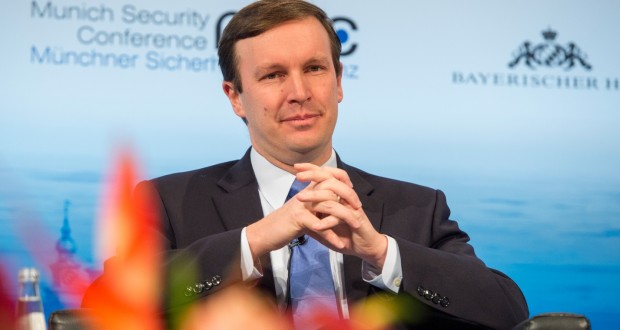 The White House Office believes that economic sanctions will lead to escalation. However, Senator Murphy noted that in the past few weeks, the tension in the Donbas has grown. "Is the Obama administration policy falling with regards to Russia and Ukraine?" MP Chris Murphy asks.

"Well, listen, ultimately, the United States is not going to fight a proxy war against Russia inside eastern Ukraine. And so long as the United States is not fighting that war, the Ukrainian army which has been undermined over the last 10 years by corrupt generals is going to be at a disadvantage against an invading Russian army or Russian supported army," U.S. Senator Chris Murphy says.

"But I have come to the point where I believe now that the United States needs to start sending more significant military assistance to the Ukraine. That was not a position I held initially in this debate. And I"ve been pressing the administration to support that view. Right now economic sanctions are not in a short run convincing Russia to pull back," Murphy says.

According to him, with new president Poroshenko taking the reins of government there have been seen significant improvements in the central office administration. "I think the administration has to start looking at some more serious levels of defensive armaments being sent to the Ukrainians. I think that would help in a fight that we have to admit is not ending anytime soon," Murphy said.

It is to be recalled that Senator John McCain said that this year he would make every effort to provide Ukraine with more serious assistance from the United States.

"The only scenario that I see is that [Russia] must return Crimea to Ukraine, [and] leave eastern Ukraine," the senator urged, commenting on the demand of the international community to the Russian Federation.