Home / US / U.S. Navy to give collective fatal blow to fleets of Russia, China and Iran

U.S. Navy to give collective fatal blow to fleets of Russia, China and Iran

Shares
U.S. Navy has developed a new strategy for fleet restructuring to improve its combat capability. 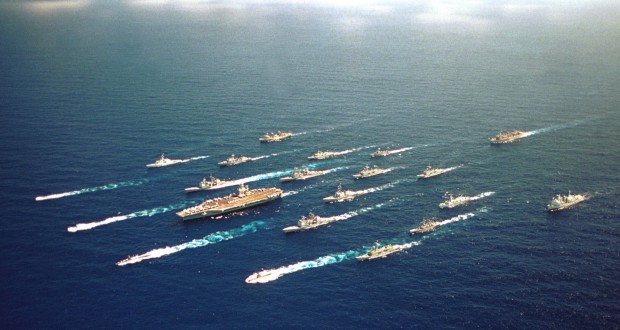 The U.S. Navy plans to reorganize the surface fleet due to heightened combat capability of the armed forces of Russia, China and Iran, The Diplomat writes. A new version of the surface fleet includes vehicles division into small combat groups, as well as an increase in the number of anti-ship weapons on more platforms.

The U.S. Navy calls these tactical changes the system of "distributed lethality", the magazine writes. "We're going to up-gun as many existing platforms as we can to achieve more total lethality," Vice Admiral Thomas Rowden, commander of Naval Surface Forces said.

This tactical change toward "distributed lethality" is largely associated with the military progress in the armed forces of Russia, Iran and China. The magazine notes that the article in one of the magazines on military subjects produced by the U.S. Navy argues that "the shift to the offensive responds to the development of increasingly capable A2/AD weapons and sensors designed specifically to deny U.S. naval forces the freedom of maneuver necessary to project power."

"As of now, the U.S. Navy still lacks an adequate long-range, anti-surface weapon to implement a re-organization of the surface fleet based on the "distributed lethality" idea. This new tactical reorganization is a clear indication that the days when the U.S. Navy's surface fleet just served as air defense elements for carrier strike groups, floating bastions for ballistic missile defense, and strike platforms for land attacks are over," the author writes.