Home / US / Blind American opens her own restaurant

Blind American opens her own restaurant

Shares
The Chicago chef Laura Martinez lost her sight as a child due to retina cancer. 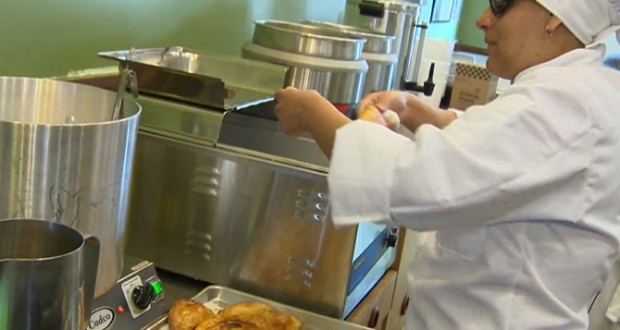 However, the tragedy did not stop the purposeful girl on the way to her dream, Joinfo.ua reports. January 16, she opened her own restaurant serving French and Mexican cuisine La Diosa, NBC news reports.

The girl did not come up with the decision to open her own restaurant at once. From the young age she was fond of culinary art, and back then she decided that she would dedicate her entire life to it.

In 2010, Martinez graduated from Le Cordon Blue College of Culinary Arts in Chicago, and then went on probation to the famous restaurateur Charlie Trotter. However, in 2013 the best cook of the United States died, and Laura lost her job.

It was so difficult to find another place for the blind chef that it was easier to open her own restaurant, and Laura Martinez decided to do it.

30-year-old Mexican is completely devoid of sight, but her culinary vision is bright and clear. She has the ability to combine spices and condiments when cooking dishes.

"I can't see in colors but my imagination is very much alive," the girl says.

On opening day of the restaurant Laura cooked meals with great care and delicacy. Her loving spouse and mother helped her with it. As it turns out, if you have a strong desire, you can achieve even unrealistic goals.