Shares
U.S. Secretary of State John Kerry believes that sooner or later the current situation in the Donbas will do harm to the Putin regime in Russia. 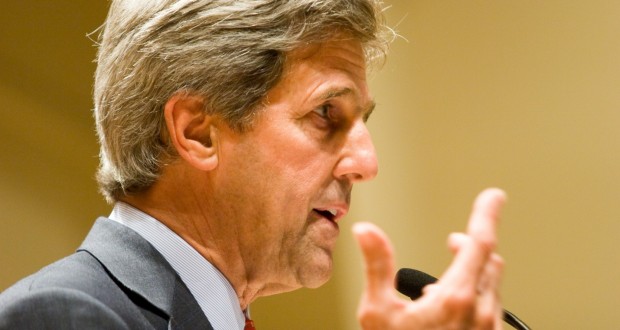 Today, the most important intrigue of diplomatic games is the question of whether the United States will provide the Ukrainian army with lethal weapons for protection against the Russian invaders and pro-Russian militants. In an interview for the TV channel MSNBC, U.S. Secretary of State John Kerry said that the West had repeatedly given Putin the opportunity to stop, but he did not even think to stop aggression. It seems that the United States has no choice but to continue to provide extensive assistance to Ukraine until the restoration of the territorial integrity of the country, reports Joinfo.ua.

However, the Secretary of State believes that there is no military solution to the conflict. "We had consultations with President Poroshenko today. President Obama will make his decision after consultation with Angela Merkel and subsequent consultations. But I have no doubt that additional assistance of economic kind and other kinds will be going to Ukraine. We do so understanding that there is no military solution. The solution is a political, diplomatic one," he said.

On his opinion, "President Putin's got to make the decision to take an off ramp." According to the representative of the United States, "we have to make it clear to him that we are absolutely committed to the sovereignty and integrity of Ukraine no matter what."

"We have tried to offer three, four or even five opportunities for President Putin to make a judgment. The last being, of course, the Minsk agreement, which called for him to withdraw his heavy artillery beyond the border, respect the international border, have a ceasefire, assist in the political process that would calm things down, and respect the sovereignty of the country." recalls Kerry.

"That he has not chosen to do. He is leaving the global community with no choice but to continue to either put more sanctions in place or to provide additional assistance to Ukraine," U.S. Secretary of State said.

He believes that sooner or later the present situation will do harm to the Putin regime in Russia itself. "Hopefully, he will come to a point when he realizes the damage he is doing is not just to the global order and the process, but he is doing an enormous damage to Russia itself. I'm convinced — I think most people are convinced — that each month that goes by, that will catch up to him, ultimately, in Russia itself," said Kerry.

"The nationalistic card is paying for the moment, but ultimately, people want their lives to be better. They want more products, they want to have their share in the rest of the world, trade and that will not happen while this is going on," the diplomat summed up.

Earlier, U.S. Secretary of State John Kerry promised that Ukraine would receive additional support of economic and other nature and declared allegiance of the United States to the sovereignty and territorial integrity of Ukraine.