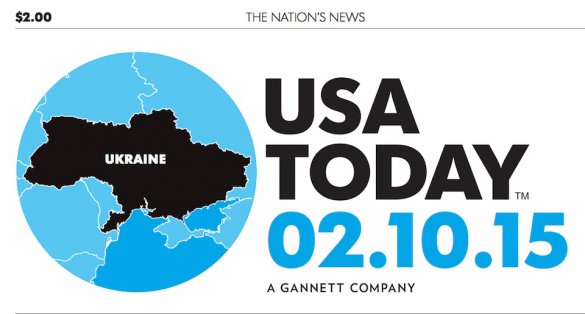 The newspaper USA Today published the map of Ukraine without Crimea. It is reported by the magazine Foreign Policy. "On Tuesday, the front page of USA Today displayed a map of Ukraine that does not include the Crimean peninsula, which Moscow seized last year and voted to formally annex in March," Foreign Policy writes.

It should be noted that the main competitors of USA Today – Wall Street Journal and New York Times – publish the map of Ukraine with Crimea, although de facto the territory of the peninsula is controlled by Russia.

The spokesperson for the newspaper did not respond to the request to comment on the incident.

It should be recalled that the Department of State urged the Russian Federation to withdraw its weapons from the Donbas and recognize Crimea the Ukrainian territory. Officially, the U.S. does not recognize the annexation of the Crimean peninsula by Russia and considers it the territory of Ukraine.