Shares
American Senators Lindsey Graham and John McCain are outraged by the behavior of President Obama and European leaders. 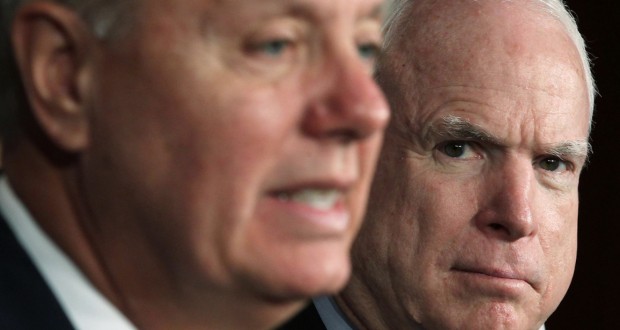 Senators Lindsey Graham and John McCain expressed their indignation regarding the developments in Ukraine and the respond of Barack Obama, Angela Merkel, and Francois Hollande blaming them of legitimization of partition of Ukraine, Euromaidan Press reports.

"The Chancellor of Germany and the President of France, with the support of the President of the United States, are legitimizing the dismemberment of a sovereign nation in Europe for the first time in seven decades. It is inexcusable to adhere to a failed ceasefire agreement as Russia and its Ukrainian proxies escalate their uncompromising siege of Debaltseve.

Western leaders say there is no military solution to the conflict in Ukraine. Vladimir Putin clearly does not think so. He continues his aggression, and in the absence of greater Western support for Ukrainian forces, a Russian-imposed military solution is exactly what will continue to unfold in Ukraine, just as it has in parts of Georgia and Moldova.

With more than 5,000 Ukrainians killed and many more wounded, it is long past time to provide defensive weapons to Ukraine and to impose additional sanctions and costs that can change Putin's behavior, including the removal of Russia from the SWIFT financial system. President Obama should do so immediately, rather than hide behind a failed attempt to negotiate with an aggressor when conditions on the ground render diplomacy ineffective."

It should be recalled that the Ukrainian political analyst Taras Berezovets suggested that Russian President Vladimir Putin did everything to make Obama supply weapons to Ukraine.