Shares
Russian President Vladimir Putin appeared on the screen during the broadcast of the story about Jihadi John, debunked militant of Islamic state. 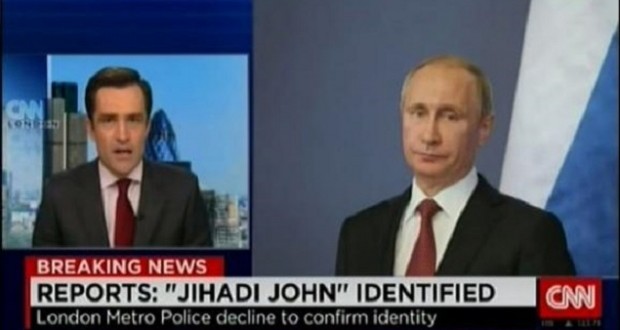 In the air of the TV channel CNN Russian President Vladimir Putin has become a 'jihadist'. During the broadcast of the story about the exposure of the Islamic militant, nicknamed Jihadist John, a portrait of the Russian leader appeared instead of a photo of the terrorist, Joinfo.ua reports.

CNN journalists had another fail during the plot dedicated to the main challenges Europe has faced – the directors showed a map where Ukrainian with Russian territories were marked by the color of the Russian flag.

Recently, a popular American newspaper USA Today published the map of Ukraine without Crimea as a part of the state.

"On Tuesday (February 10 – Ed), the front page of USA Today displayed a map of Ukraine that does not include the Crimean peninsula, which Moscow seized last year and voted to formally annex in March," Foreign Policy writes.