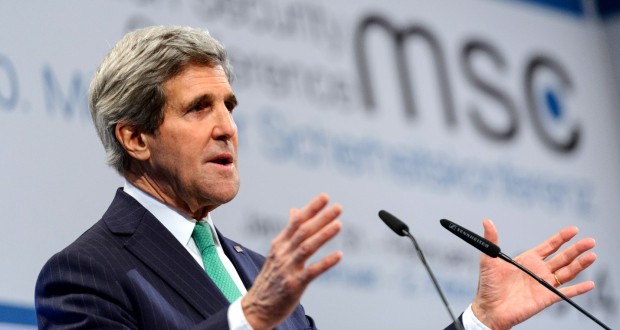 Speaking at the session of the UN Human Rights Council, Mr Kerry said the gunmen withdraw heavy weapons from the front line only in certain places, BBC reports.

Meanwhile Russian Foreign Minister Sergei Lavrov said there had been "tangible progress" with the truce.

Both Ukraine and the rebels say they are withdrawing heavy weapons in line with the deal made in Minsk last month, the article writes.

Monitors from the OSCE security group have reported weapons movements on both sides but say it is too early to confirm a full withdrawal.

According to BBC, Mr Kerry and Mr Lavrov held talks on Monday as tensions remain high over the conflict. The fragile ceasefire is said to be broadly holding, despite some fighting in recent days.

Speaking at the UN Human Rights Council, Mr Kerry said he had warned Russia that it faced further sanctions if the conditions of the ceasefire were not met in full.

But he said he was optimistic the truce could be completed in "hours, certainly not more than days".

"I'm very hopeful that it will in fact be the start of a change which would be an improvement for everybody," he told a news conference in Geneva.