Home / US / U.S. Congress calls on to create buffer zone between Ukraine and Russia

U.S. Congress calls on to create buffer zone between Ukraine and Russia

Shares
The U.S. Congress does not believe in peacefulness of the Russian invaders, so it is seriously discussing the issue of arms supply to Ukraine. 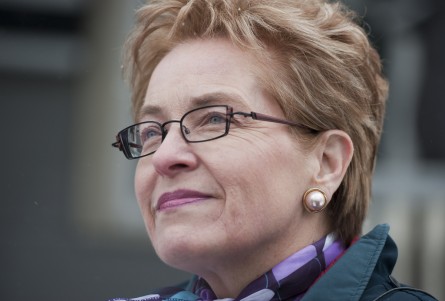 The U.S. Congress is preparing for the worst-case scenario, predicting further Russian aggression against Ukraine. This was told by Marcy Kaptur, a representative of the State of Ohio in Congress, Joinfo.ua reports with reference to TSN.

The politician is very concerned about the tense situation around Mariupol. She believes that it is necessary to build a strong defense system for the protection of Ukraine's borders.

According to the Congresswoman, it is what President of Ukraine Petro Poroshenko should do now. His today's task is the constant appeal to representatives of different countries for protection at the most important meetings. It refers not only to the NATO members, but other countries that honor freedom. "Poroshenko should not lose a single opportunity to talk about it, to involve the presidents of other countries," said the representative of the State of Ohio in the U.S. Congress Marcy Kaptur.

She believes that on the border between Ukraine and Russia there should be a buffer zone in the form of a wall or a military-controlled territory. In addition, she is convinced that there should be created an area for free movement in both directions. "We should protect the Ukrainian border and any city by all means. Kharkiv and Mariupol are now very vulnerable. And we do not know what the Russian military strategists are thinking now," Kaptur said.

It should be noted that the U.S. Congress sent a delegation to Ukraine to discuss the issue of providing the Armed Forces of Ukraine with lethal weapons.